My tweets and retweets on Election Night 2012:

It's a given that Romney will lie in his concession speech. He'll say he supports the president and wishes him well.

News flash: If the election is too close to call, the Supreme Court's conservative five are ready to invent a reason to give it to Romney.

Someone needs to reinterview the Bronco Bamma girl and tell her our long national nightmare is finally over.

Ezra Klein: "Right now, all the data we're getting in tracks state polling over the last week. if that holds, it's bad news for Romney."

Obama ahead 51-49% in Florida with almost 2 million votes counted. If he takes Florida, it's all over, folks. #ICTMNVote

Third-party candidates getting 1-2% of the vote, with Johnson in the lead. Could make a difference in some states. #ICTMNVote

Obama takes Pennsylvania. Gonna be over soon. If he takes OH, VA, FL, and CO, can we call it a landslide? Or at least a mandate? #ICTMNVote

Elizabeth Warren wins in MA. Will she be the only Native in the Senate, or what? Will she answer ICTMN's questions now? #ICTMNVote

Based on all the trends, I'm calling it for Obama. It's all over but the vote counting. Four more years of hope, change, and the status quo!

Matt Yglesias: "If your candidate says something insane and repugnant about rape, the electorate has a way of shutting the whole thing down."

Ezra Klein: "Early to draw political lessons, but if you're a GOP candidate and you've got a theory about rape and abortion, maybe keep it to yourself?"

Tim Wise: "And THIS is what community organizers do, conservatives…they own your pathetic asses. Welcome to the future. Suck it up or leave the country"

My deep thought on the 2012 presidential election. pic.twitter.com/QHpsN2UX 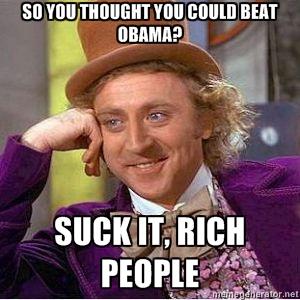 Put away your coat hangers, women. You won't need 'em for another four years. #RepublicanWaronWomen #ObamaWins

Another deep thought on the Republican attitude toward women and women's issues. http://qkme.me/3ro80u via @quickmeme

Tim Wise: "Good news? Romney got crushed & the right has 2 question their certitude about God's will. Bad news? At least 4 more books from Ann Coulter"

Joan Walsh: "The Obama mandate: His re-election is a victory for using government in tangible ways to improve people's lives http://www.salon.com/2012/11/07/the_obama_mandate/"

Bill Maher: "Tea Party has now cost the Republicans 5 senate seats. My next donation is going to them."

Glenn Greenwald: "The GOP has been crushed in 3 out of last 4 elections. #BushCheneyLegacy"

Thank you, George W. Bush. Your wars, disasters, and recessions didn't just give Obama four years in office. They gave him eight years.

Obama should appoint Romney his jobs czar. That would throw Republicans into a tizzy!

Thank you for reelecting President Obama, women and minorities.

To Mitt Romney and his family members: Get a job, you lazy bums!

Unlimited spending, voter suppression, rigged machines...none of that can overcome people power. The 99% decide who's president, not the 1%.

"News flash: If the election is too close to call, the Supreme Court's conservative five are ready to invent a reason to give it to Romney."

That would be a first.