By Oliver DarcySince hundreds of commenters protested this potluck, calling it false, "politically correct," and un-American to question Thanksgiving, I posted the following notes:

There sure are a lot of racists in this thread. Singing the usual refrain of white supremacists everywhere: You lost, get over it, assimilate, you're lucky the whites won, America is great, love it or leave it, etc.

None of this has much to do with the Native students' right to hold a potluck and examine the myths surrounding Thanksgiving. But it's revealing how many people can barely keep their racist impulses in check. 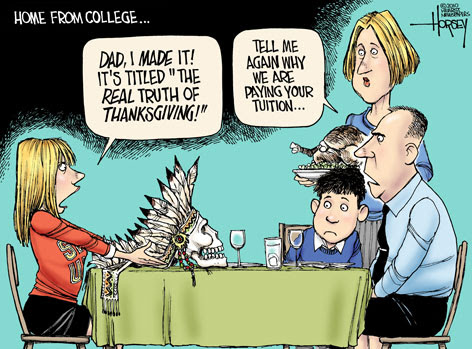 I was vaguely surprised that this posting garnered hundreds of comments, many from people off-campus. The following article explains why this happened.

Ignorance is an American value?

Fear and Loathing of History on Thanksgiving

By Steven NewcombComment:  Given that this story has raised "awareness about the less glamorous parts of America’s history," Bailey's "not true" claim is ludicrous. She's an idiot to mistake her opinion for a fact.

And it's funny how many people want to shut down this debate. Their impulse is to censor the historical facts rather than refute them. What the hell are they so scared of, you have to wonder. A worldview based on a fairy tale of white Euro-Christian supremacy is like a child's belief in Santa Claus. Grow up, you little babies. 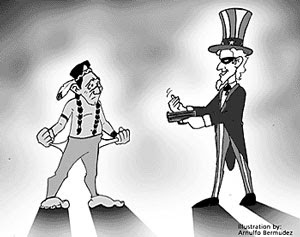 I prefer Drudge to any other web site for news, but this is more to its superior design.

Anything else I see has chaotic design, bad fonts, worthless video links all over, and other detractions.

I'd welcome a similarly well designed site that is centrist or even left-wing.

HuffPo is a perfect example of terrible design. I go there, and all I see in my browser is a giant vague headline and half a vast oversized photo.

If I go to Drudge, I find a large photo: but it is complete. I also find 9 descriptive headlines. All in the same space as the "nothing" on HuffPo.