Two others refuse, opt for jury trialComment:  When the whalers prove they exhausted all other potential remedies--filing a lawsuit, running for tribal office (to spur the Makah government along), etc.--then I'll believe they were acting on principle.

What about the spiritual preparations required before one hunts a whale? There's been no evidence that the Makah 5 did anything to embrace their culture other than killing.

So the crime of ceticide is only a misdemeanor? That seems insufficient to me. What would you have to do to get charged with a felony: exterminate the species?

No wonder the men went whaling. They knew the worst they'd get was a slap on the wrist. In exchange they garnered worldwide publicity for their cause. 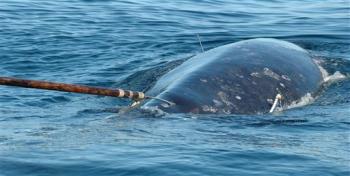 Writerfella here --
Unlike EuroMan and his Protestant protestations to the contrary, 'spirituality' is constant and ubiquitous for most Native Americans. One wears one's spirituality just by being alive, not as one's "Sunday best." It is 24/7, whereas it is 1/2/1 for the rest of America, at best. As for felonious behavior, let's ask the Great Auk, the Passenger Pigeon, the Hawaiian Moa-nalos, the Carolina Parakeet, and the Eskimo Curlew for their opinions of EuroMan...
All Best
Russ Bates
'writerfella'

What does 1/2/1 signify? Two hours a day, one day a week would make sense. But what about the second 1? One week a month? One month a year?

A lot of the Indians I've met are urban and acculturated. That's not surprising since the majority of Indians live off the rez and away from their traditional cultures. Therefore, I'm guessing spirituality is "constant and ubiquitous" for many Indians, but not most.

Writerfella here --
In Oklahoma and therefore other states, most Protestant sects, and especially the evangelical ones, hold services on Wednesday nights or Thursday nights...
All Best
Russ Bates
'writerfella'