Here's the story behind and the results of David Yeagley's participation in Historiens Fångar, the racist Swedish documentary.

Here's Yeagley announcing the Swedish documentary to his fans (4/17/07):Brent Michael Davids (the source of this posting) summarizes Yeagley's attitude:When the film came out this year, Yeagley was the only "Indian" on-camera as a spokesperson. Because of the film's right-wing propaganda, it was greeted with scorn and derision among Indians.

The fallout was so negative that even Yeagley has been backtracking. An example:But he won't apologize for his role in this racist film. One of his Bad Eagle forum members has taken him to task for that:Al Carroll, another Yeagley critic, summarizes where Yeagley went wrong:

Badeagle "A Website Where Very Few Indians Comment": Yeagley Gets Torn Apart at His Own ForumComment:  For more on Yeagley's mistakes and missteps, see Yeagley the Indian Apple. 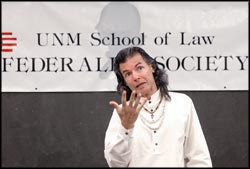 Wouldn't it just be nice if he pretended to be Swedish from now on?

It would be Wonderful if he would claim and use everyone like he uses the Comanche People. He loves the Jews, Italians, Persians, Puritan Caucasions. He loves and admires everyone but his own Nation of Comanche Indians, who are closely related to the Mexicans and of course he hates Blacks he doesn't even try to disguise that fact. The only relationship he has with the Comanche Nation is to use them as a stepping stone.

He won't admit this, he thinks with all his hard work and degrees the Indian People are jealous of him, nothing could be further from the truth, its all for nothing if he thinks they are impressed, they take him for a grain of salt, nothing more, sorry to say, not one envies him, he thinks different.

Will he ever change?