An interesting comparison of the plight of today's Tibetans and yesterday's Indians. Not only are they similar, but the author chose the Indian analogy precisely to make his point.

The last of the Tibetans

Their culture may survive only outside of China's sweeping modernization.Some Tibetan-Indian parallels:And:Comment:  For more on how modernization and globalization have affected indigenous cultures, see Globalization:  Exporting the American Way.

Below:  An Indian shows how to dress up in traditional (i.e., stereotypical) garb for tourists. 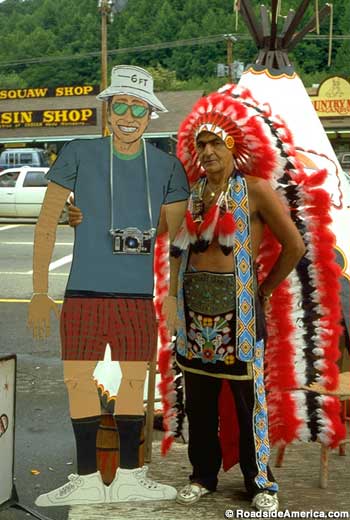 Writerfella here --
Further great! Now Yeagley's going to claim he is the Native Dalai Lama, when he's closer to being a Native Dalai Parton!!
All Best
Russ Bates
'writerfella'

Writer: Parton you for saying that.

Rob: Good points made. China's aggression against Tibet is a sort of "Manifest Destiny" stab againt that Central Asian nation: which China claims out of an imperial "might makes right", "Tibet is ours" for sole reason that they were capable of invading it, conquering it, and the international community acquiesces, having done as much for Tibet has has been done for the Darfur region.

And if you like Tibet, just wait until the PROC's "manifest destiny" crosses another international border to the east, to Taiwan... the PROC has for all intents and purposes announced a plan to visit a holocaust on this nation which also finds itself a target.

Writerfella here --
OMG, it still is ongoing. Will it end with Native Tibetans being placed on 'reservations?' Shades of the Wovoka circumstance...
All Best
Russ Bates
'writerfella'

I would not let the Tibetan people down by believing the Chinese might conquer the spirit.

Especially when our USA fate lies in their financial hands, we might fear more for ourselves. I would not call them the new Indians. The New Indians are those dispossessed in our global economy up the block and standing with cardboard signs "will work for food." or "No work, no food, no home, Help."

There are Apaches living as Apaches, and as impressively as any of us ModRN NDNs may think ourselves to be, we are the ones who are fading in the sunset.

Tibet and Hopi land are spiritual poles of the Earth, and I do have faith in the universal divinity of our purposes given by the Creator, to be true to the ERTH and strong, no matter the temporal limitations of our Westernized intellects or the ferocity of oppressors with thousands of years practice.

The Tibetans are not obstacles, but markers in the general overall struggle of indigenous peoples against colonizers past and present(economic).