Most lost tribes don't need to be filmed for television. They need to be left alone.

For a look at how contact can destroy an Indian tribe, see my review of End of the Spear (pictured below). 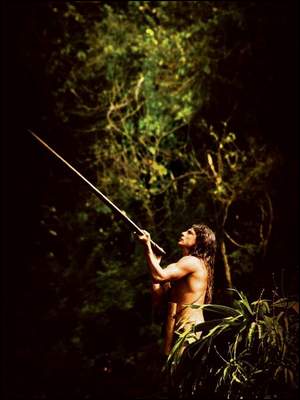 Writerfella here --
There already was a whole motion picture produced in 1992 that dealt with that very problem. MEDICINE MAN, starring Sean Connery and Lorraine Bracco. The lead character had gone to the Matto Grosso to study a Native tribe and almost wiped them out because he gave them a Flu virus they otherwise would not have met. So, he remained there more or less in exile and has discovered a natural agent against cancer, which would explain the real-life facet that 'lost tribes' suffer cancer almost not at all. The film more or less states that 'genocide' both is an active and a passive consequence of contact with EuroMan. The film had the advantage that there were no stereotypes present at all in its portrayal of Native Americans. The greatest statement of the film was this: the rain forests are harbors of diseases and ALSO the factors that control them. Destroy the rain forests, and you unleash the factors of disease while destroying their cures...
All Best
Russ Bates
'writerfella'