Barack Obama spoke on the controversial remarks of Pastor Wright and the larger issues of race Tuesday. Although he spoke mostly in black-white terms, his words should resonate with Native people.

Barack Obama’s Speech on RaceHere's his one mention of Natives:Comment:  Any questions about why Obama is the best presidential candidate for Indians in 2008?

Just one problem with Obama's speech: He said slavery is America's original sin. Not quite. Killing and conquering Indians is our original sin. 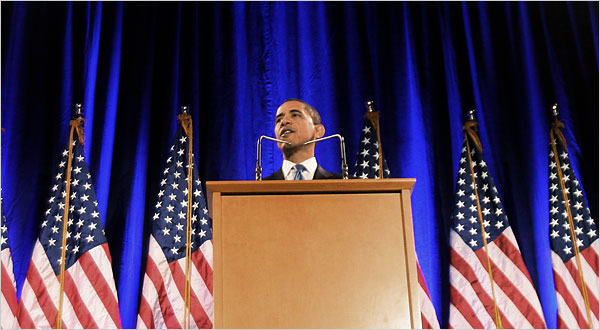 Writerfella here --
Yes, one scintillating interrogative: why did he wait so late in the campaign process finally to acknowledge that, race NOT being a factor in his campaign, only was a pretense? It quite is indicative that real life finally caught with Barack HUSSEIN Obama and that erstwhile bubble of aloofness came to be bursted by the very people with whom he so closely had surrounded himself. Will the electorate at last be judging him by the company he kept? Don't miss Chapter 13 of THE CLUTCHING HAND at this theater next week!
All Best
Russ Bates
'writerfella'

Writerfella here --
POSTSCRIPTUM: There actually is no problem with Obama's speech, as he himself just has answered the question about who always will weigh more importantly in his thoughts and considerations: Blacks or any of the other races in the US of A...
All Best
Russ Bates
'writerfella'

Obama didn't address the race issue before now because he didn't have to. Until the Wright issue surfaced, only nattering naysayers like you were attacking Obama because he's black.

Incidentally, we're still waiting to hear who you think would make a better candidate than Obama. I know you're not too brave intellectually, but try to man up, as they say, and name someone.

Writerfella here --
Why, Rob, all you have to do is read one of your own questions, and there you'll have it! No brag, just fact...
All Best
Russ Bates
'writerfella'

I don't want to guess the answer based on one of my questions. I want you to state the answer plainly.

To reiterate: We're still waiting to hear who you think would make a better candidate than Obama. I know you're not too brave intellectually, but try to man up, as they say, and name someone.

Clinton, McCain, or someone else. If you're not too much of a coward, tell us which candidate you support.