House halts casino pushEven if Massachusetts votes against casinos, it won't necessarily stop the Mashpee Wampanoags:Comment:  Here's how you stop Vegas-style Indian casinos with slot machines and table games. You don't legalize them for tribes or anyone else.

If you don't want "bingo slots" casinos in your state, there's a simple solution for that too. Don't legalize bingo.

Therefore, it's ridiculous to criticize a tribe for having a "monopoly" on gaming. They have a monopoly only if the people of a state allow it.

Another article says, "The latest plans for the Mashpee Wampanoag tribe’s proposed casino include a 15-to-18 story hotel adjacent to a 3-4 story casino." That seems ambitious for a second-tier casino in a small town. If I were an investor, I wouldn't bet my money on its happening.

P.S. The Massachusetts situation has been a big story on PECHANGA.net the last few months. As someone who has to post every gaming article coming out of the state, I hope the story dies down for a while. ;-) 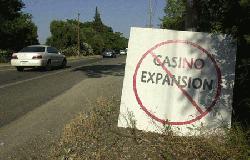 Writerfella here --
In Oklahoma's case, Bingo was legal but limited to low dollar amounts, most especially for the Catholic Church and various private charities. Native Bingo operations sprang up over time from the 1970s forward and eventually became the only venues for high stakes games, much to thunderous complaints from non-Native entities. But no attempts were made for casino-style gambling because Oklahoma long ago had enacted anti-lottery legislation. Oddly, the last three state governors took it upon themselves to push for legalized racetrack gambling and a statewide lottery, trying to get the matters to a favorable public vote by tying large percentages of projected proceeds to state education. Though writerfella loved playing Bingo because he won at least twice a week, he also had toured Native casino facilities in Minnesota, Iowa, and Connecticut, but not to gamble as there was one strikingly obvious characteristic. Though almost all such casinoes began as Bingo halls, Bingo itself was all but absent from the newer evolutionary form. Thus, back in Oklahoma, writerfella joined the opposition to lottery legislation, warning that the Djinn was about to be set free from the lamp of reason. The first time or two that the lottery came to a statewide vote, it failed. Then Native tribes began to support the governor's efforts and eventually the lottery was passed. Oklahoma Native casinoes began to spring into being almost overnight until there now is one every 20 miles or less, and less, and less. And like Beta format VCRs and 8-track tapes before it, Bingo became obsolete and finally extinct. As in other states, Bingo dried up and blew away, only being played both fitfully and small in strip malls in Oklahoma City and Tulsa. A few curious things, however: the lottery is failing in Oklahoma, and the state's share of casino gambling proceeds also are wavering around 60% of what truly were politically exaggerated and overoptimistic expectations. And the state legislature and education agencies are not pleased by the shortfalls. The rumblings are that abrogation may be afoot, though writerfella himself takes neither interest nor joy in the discussions. Even if the plug was to be pulled and Oklahoma casinoes were undone, Bingo is dead and buried and gone. writerfella knows because he went to the funerals...
All Best
Russ Bates
'writerfella'

"Therefore, it's ridiculous to criticize a tribe for having a "monopoly" on gaming. They have a monopoly only if the people of a state allow it."

I'm not singling out Native casinos for special negative OR positive treatment.

Bingo is dead? Not quite.

The pen-and-paper version may be dead or dying, but bingo lives on in the form of Class II "bingo slot machines." These machines look and act like Class III slot machines, but they really play bingo behind the spinning reels.

They're perfectly legal (so far) and they don't require a state compact. Which makes them the machine of choice in places such as Oklahoma and Florida--places that haven't legalized genuine slot machines until now.

In addition, some Indian casinos still play traditional bingo--in California, at least. Bingo may disappear someday, but it hasn't gone the way of the passenger pigeon yet.

A state's government presumably enacts the will of the state's people. That's the theory, anyway.

The theory held true in the Massachusetts case. Reflecting the views of their constituents, the state's legislators voted to table the governor's plan. That effectively killed the plan, for now.

In contrast, a traditional monopoly such as the phone company usually holds sway on the national level. It's usually the result of large-scale economic forces, not a political vote. States can't stop such a monopoly and even the feds may have trouble controlling it.

A state gaming "monopoly" is rather different. The state can give or withhold permission for gaming to proceed, so it's under the state's control. Moreover, the authorizing vote usually reflects the people's will. So the monopoly doesn't exist despite the people's wishes, it exists because of them.

I suppose a state government could act against its people's wishes, but I don't think that's happened in the industry yet. If there's any chance the people won't approve, politicians usual put a gambling question on the ballot rather than decide it themselves. That's occurred in several states and it may occur in Massachusetts, too.

Writerfella here --
"Bingo-based" is about as meaningless as "based on a true story" when it comes down to verisimilitude...
All Best
Russ Bates
'writerfella'

What are you talking about, Russ? Who said anything about "bingo-based," and in what context? Not me.