The LA Times posted a blog entry asking about the Top 10 Historically Inaccurate Films. To illustrate the concept, they used a picture from Apocalypto. Here's how I responded:

I review Native American-themed movies on my website. Here's a top 10 for this subcategory alone. Some of them are probably bad enough to compete with any historically inaccurate film.

Of course, any Western that depicts Indians as mindless savages, whooping and killing like animals, is bad. But this is only one mistake--albeit a big one. I don't know how it compares to movies with dozens of historical mistakes.

Addendum:  The most inaccurate film in history may be an early screed such as The Birth of a Nation. A Technicolor spectacle such as Cleopatra. A "science-based" thriller such as 1 Million Years B.C. Or a revisionist exposé such as JFK. Any other nominations?

Of course, we're implicitly limiting ourselves to major motion pictures. If we got into B-movies about Hercules or Tarzan, Godzilla or little green aliens, I'm sure we could find thousands of horribly inaccurate films. 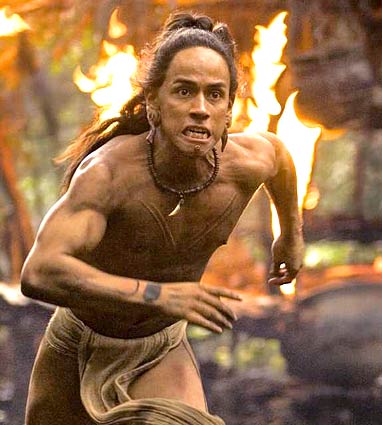 I wonder what category you would put the Bill Jack movies in?

I don't remember Billy Jack well. But a part-Indian veteran who tackles problems with martial arts doesn't seem farfetched to me. I'd say whooping hordes of savage Indians are more removed from reality and therefore more inaccurate.

Writerfella here --
Oooh, the USS Sherman Alexie had better watch out, as the NSA or The SuperAgency just may be after him and his published material. Oh, they're NOT after writerfella, by the bye, as he once worked at Parrington Field on Area 51 and they don't dare come after him! He knows where the bodies are buried...
All Best
Russ Bates
'writerfella'

Thanks for sharing, Russ. But what does this posting have to do with Sherman Alexie? I'll give you a hint: nothing.

Given its general cultural references and its specific mentions of things such as Kuzco, Micchu Pachu, and Viracocha, The Emperor's New Groove and its spinoffs clearly take place in the Inca empire.