If you're a TV watcher, you know the premise of New Amsterdam: 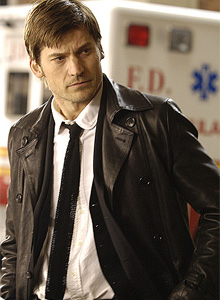 Writerfella here --
Rob, you miss on a lot of points, but that's understandable. You are dealing with science fiction and not FANTASY. First, immortality would grant ennui and not indifference. You cannot change your existence yourself, though you may have tried and such therefore is implicit. Second, Amsterdam has had MANY job descriptions, once even as a surgeon during the Civil War. Thus it is that his job as a police detective in the 21st Century ONLY is his LATEST occupation. As such,this is how we are encountering him. He as easily could be a psychiatrist encountering current people with modern afflictions. Thank heavens they didn't go that way with the series. Third, he has had many wives and many children, BUT WHAT IS THE THRUST OF HUMANKIND? To sit back and watch time go by as a non-participant, or actively to try to find that one person promised to you by those who TEMPORARILY have made you into an immortal? The episodes so far have tried to establish that his inamorata SEEMED to be that person he was seeking. Fourth, writerfella already has made note of the 'teepee' gaffe. It only briefly was seen and judged excusable because the original writer(s) is(are) not responsible for the CGI input later implanted, as both movies and TV are collaborative media. Amsterdam's character far is larger than you will allow, if only that you are evaluating him as compared with the bulk of TV's characters, and he in fact is built far more richly than any (or most) that have gone before. Amsterdam has that 'alien point of view' that the rest of us lack because he has seen history occur and the rest of us only know the part through which we are living, if darkly at best.
This a 'try-out' and FOX cancels those that do not bring in the ratings. In fact, FOX mostly is looking forward to their new "X-FILES" clone project titled FRINGE. TERMINATOR: THE SARAH CONNOR CHRONICLES may not be returning, therefore, despite landing in the top 20 highest-rated programs during its 'try-out' run. The one thing you learn about working in the film industry is that NOBODY knows what is best for the film industry. Luckily, BATTLESTAR GALACTICA in its newest and best incarnation was telecast by a cable channel and not by a major TV network...
AllBest
Russ Bates
'writerfella'

When you become immortal, Russ, I'll take your opinion on how people react to immortality seriously. Until then, your opinion on the subject is no better than mine. It's basically worthless.

I'm well aware that Amsterdam has had many jobs. I never said otherwise. What I did say is that his present job as a detective is a unimaginative and clichéd choice on the part of the show's creators. Making him a journalist or something else would've been more original and interesting.

As for "the thrust of humankind," who said the choice was between doing something and doing nothing? I never said Amsterdam should do nothing. What I said is that there's more to life than love. The thrust of his life could be saving lives, spreading the gospel, or creating lasting art. Since many people have devoted their lives to these things, he'd be no different.

Yes, you already noted the teepee mistake, and I already responded to your whitewashing of the mistake. Here, read it again:

If New Amsterdam's writers weren't responsible for the teepees, its creators are. In case you didn't know, every frame of a TV show gets reviewed before it goes on the air. No one from a CGI lab slipped in the teepees without the creators' knowledge or approval.

Re "Amsterdam's character far is larger than you will allow, if only that you are evaluating him as compared with the bulk of TV's characters": Actually, I'm evaluating Amsterdam compared to the hundreds of cop characters I've seen on TV, most of whom are deeper and richer than he is (so far). Among those that surpass Amsterdam at present are Dexter Morgan on Dexter, Agent Mahone on Prison Break, Charlie Crews on Life, every cop on The Shield, and every detective on Law & Order: SVU. Not coincidentally, these shows are better than New Amsterdam (so far).

Am I supposed to be impressed with Amsterdam's "alien point of view" lite? I've read tens of thousands of comic books and sci-fi stories where the protagonist had an alien point of view. The idea of an immortal may have been fresh when I read my first THOR comic or Edgar Rice Burroughs novel 40 years ago, but it's nothing new now.

If at first you don't succeed, try, try again. But this time, try something different--something other than your usual fawning praise.

Yeah, those teepees annoyed me when I saw them. Not a bad show, but for all of the research the writers do on Manhattan, you'd think they'd do a little bit about its original inhabitants.

Writerfella here --
Apparently what you know about television production wouldn't fill a single paragraph in TV GUIDE. Television episodes are written in less than two weeks' time, they are approved by staff and networks in four days' time, they are cast and rehearsed and blocked out for filming in a week's time, and then they are shot in four to seven days. Post-production including second unit filming, special effects additions, and music scoring take four days more. Often, a TV episode finally is ready for air less than 72 hours before it is telecast. Two more episodes are deep into production as well by such a time. You imply that those tepees were there because the creators wanted it that way. Sorry, Mr. Gumby, but your head hurts because you only have a piece of brain stuck in your forehead.
Why were there no Native Americans in the ship's crew on the original STAR TREK? Deadlines and the sheer speed of filming and scheduling led to that singular oversight, even with Gene Roddenberry and Gene L. Coon working 20-hour days trying to stay on top of every aspect that they could...
All Best
Russ Bates
'writerfella'

Tell me something I don't know, Russ.

So what if a show is completed only 72 hours before it airs? How long do you think it takes to review five seconds of computer graphics? I'm guessing it takes about five seconds.

Are you seriously arguing that the producers of a million-dollar TV show would insert graphics without checking them? What if some protester put in an anti-American message to strike a blow against the Bush administration? If you think something like that could ever get on the air, you're more deluded than I thought.

In fact, none of your irrelevant comments address my claim: that the creators review every frame of a show before it goes on the air. If you disagree, show us the evidence for your position. Your opinion on the matter is worthless, as usual.

Also, let's note a point you obviously wish us to overlook. You don't have the faintest idea who commissioned the teepees in New Amsterdam. For all you know, it was the writers.

Again, if you have any evidence to the contrary, let's see it. Put up or shut up.

Bottom line is that someone made a mistake and no one corrected it. I don't particularly care if it was the writers, the computer graphics people, or someone else. It's symptomatic of our cultural myopia that everyone thinks Indians lived in teepees.

By the way, I love how you constantly defend the "EuroMan's" mistakes and stereotypes. Is this an example of how Native people think differently? Yeah, you sure think differently from me, all right. You shill for the man and I don't.

Incidentally, my estimation of immortality is that someone with a curious mind could keep busy traveling, meeting people, reading, and learning for several centuries, at least. Boredom might set in after one or two millennia, but I doubt it would happen before then.

I base this on the fact that I could easily fill up ten times my allotted lifespan with the things I want to do. Therefore, my opinion is that your opinion about ennui is wrong.

Writerfella here --
Okay, something you don't know, Rob: up to now, the longest word you ever used in this blog was WATERMELON!
All Best
Russ Bates
'writerfella'

Considering that I routinely discuss such tribes as the Mashantucket Pequots, the Schaghticokes, the Potawatomis, the Narragansetts, the Passamaquodies, the Chickahominies, and the Shakopee Mdewakanton Sioux, that's funny.