Following up on my "nanny state" posting, I posted the following note on Facebook:

Conservatives, I'm waiting for someone to identify a particular year when government was small, markets were free, and life was good. Maybe you can name the golden year of this imagined golden era so we can debate reality, not fantasy.

This lead to a brief discussion:Someone suggested 1820. So basically when women and minorities had no rights and white male property owners ruled? When the US seriously began destroying Indian cultures west of the Appalachians? Yes, that may have been a golden era for a small minority of white males. The majority probably thought otherwise.So we're still waiting for a serious suggestion. Pick a year since 1776 and we'll discuss whether people--all people--were better off than they are today under the so-called "nanny state."

For more on the subject, see Didier:  Stop "Protecting the Weak," Westerners = Freeloaders, and The Myth of American Self-Reliance.

Below:  1868...a good year for land-hungry white men who counted on the US Army to clear "dirty redskins" out of the way. 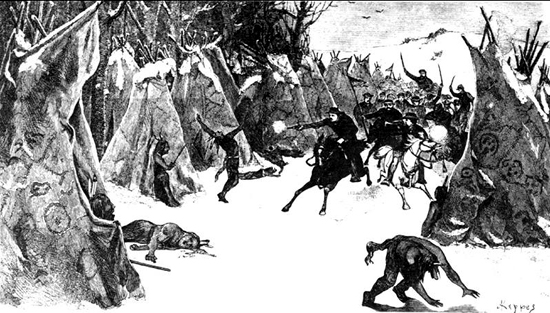 Hilariously enough, a lot of the things conservatives oppose, such as higher taxes, were even higher in the 1950s, with the wealthiest 1% paying 90%.