Not much to report today. Drove to Victor Rocha's house Sunday night. After a big breakfast Monday, Victor and his mother and I drove to Las Vegas.

A couple of highlights or lowlights of the trip: 1) A van labeled "Old White Man Mobile Service." 2) A long-haul truck labeled "Navajo" with an Indian maiden's head wearing a headband with a feather. 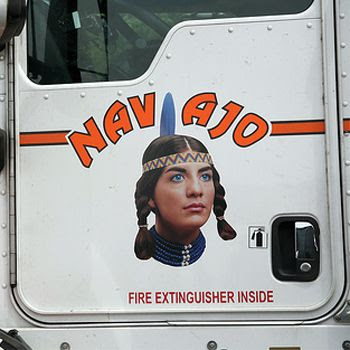 Someone blogged about this image, which I saw only for a second:

Being of Navajo descent doesn't make you a Navajo. Moreover, the headband, feather, braids, and choker have nothing to do with the Navajo. They're pure stereotypes and offensive to many Natives.

Back to the trip

In Vegas, we dropped off Victor's mother at Harrah's, then headed to the MGM Grand. We arrived at 5 pm and checked into our room.

I called my brother, who recently moved to Las Vegas. He picked me up and drove me to his new home. I had dinner with his family and played a couple of Wii games with the kids. While he put them to bed, my sister-in-law drove me back to the hotel. And that was that.