"The Squaw's Appeal" in Belle magazine

Style Weekly calls itself "Richmond's alternative for news, arts, culture and opinion." "In addition to our flagship weekly," the website notes, "we publish: Belle, a monthly lifestyle magazine for Richmond women."

The November issue of Belle is raising a ruckus on the Web. Here's why:


On pages 11-12 is a two-page spread titled "The Squaw's Appeal" about Kate Horne, an artist who makes prints and ceramics. As the article explains:Horne brands herself with the headdress, she explains, so people will recognize her at the gallery.

Compounding the offense, the article shows Horne putting some sort of clay on her face like warpaint. And shows her looking off into the distance like a watchful Indian scout.

Here's a reply posted on the magazine's site:And here's what people on Facebook are saying about this:

A reply from Style's editor-in-chief:Comment:  To refresh your memory about what's wrong with this feature, see Squelching the S-Word and Why Hipster Headdresses Aren't Okay.

Horne's Facebook pic shows this is no aberration. She's proud of her "Big Squaw" identity.

I can't read her Facebook page, but someone tells me she wrote:So she's a "squaw," a shameless self-promoter, and a racist. Got it.

Can you imagine painting her face black, putting on a kerchief, and calling herself the "Big Mammy"? Because that's exactly equivalent to Horne's actions.

Meanwhile, Roop offers the usual non-apology "apology." Mock concern for the person's feelings. The magical power of intent as an excuse. No admission of actual wrongdoing. No promise to print a retraction or chastise the people involved. Just a vague "we'll discuss it" pledge.

For more on the subject, see Rachel Zoe as an "Indian Warrior" and "Reservation Hotties" and "Welfare Chicks." 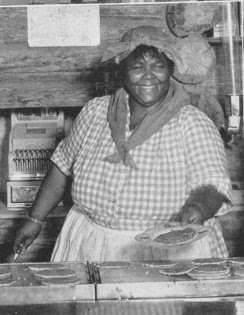 And in the Confederate "national capitol", of all places.

"The Big Squaw" Seriously?? I can't figure out who is more ignorant, Kate Horne and her fiance or the editor. I feel a little embarrassed for Kate because I'm giving her the benefit of the doubt and assuming that she really has no clue how ignorant she is. Not only that, but now her ignorance has been shown to all the people reading the article and who sees her in her "art" gallery. Belle magazine, this is what you are represented; be careful what image you want to stand for. It's comical that this magazine is about culture, yet they know nothing about culture. What if there were non-African American people in the article with their faces painted black with the letters "The Big Nigger" as a headline? Thank God for Dr. Martin Luther King Jr and many others who followed in his footsteps because this problem could have still been a current issue. Well, all Native Americans must take on the responsibility to educate society on what most of America wants to forget. The whole article is extremely offensive and Hollywood has "branded" the Native culture to people in a fictional image. Wake up people it's 2010. Let's educate ourselves before we make fools of ourselves.

Wait one f--king minute!! For your info there ARE people who do offesive shit all the time to black people with you people rarely ever saying a damn thing so the f**k are you kidding?!! It is NOT black people's f**king job to protect the image of every damn person of color epsecially when most of you don't give a SHIT about us!! You are not my responsibility never have been never will be so I don't need to break my neck to save you.

I agree with Anon.
We, as Black people, have our own problems to deal with on a daily basis. Add to that being a woman.
A Black woman, phew, it's not a rose garden that's for sure.
I empathise, but gone are the days of relying on Black people to rally and protect and defend other minorities as soon as they are facing racism.

Rarely, if ever, do we see the same defending and protecting coming from non Black minorities when we are faced with discrimination and plain racism.
You'd probably breathe a sigh of relief knowing i am in the minority [of Black folks] who feel this way, but more and more Black people are waking up and are tired of being used when necessary, tired of being compared to, and tired of being mules to the world.
We have our own struggles to deal with every damn day.
It's gone as far as people EXPECTING black people to be there for them, no if and, or butts, it's automatic.
Hispanic (non black ) people, Asians, and now native Americans.
Everyone expects Black people to bend over backwards for them.
Enough is enough.

Mammy days are over.

BTW, very offensive pic and words at the end there.
I understand it's for effect, but really, stop it.

Agreed with Sick&Tired. You're right, the "artist" is ignorant and racist. Unfortunately, the caption YOU wrote to accompany the "mammy" picture are racist, too. Please hear your African American audience and remove it.

I too, think the caption with the last picture is stupid. How does that support what you were saying? She wasn't talking like a fake Native was she? You ad-libbed your own ignorant lines there. Stupid.

"Sick and Tired"'s comment is a clarion call for Black people to support racism, pure and simple.

"We have our own struggles to deal with every damn day."

As long as the racism isn't affecting black people, it's A-OK according to "Sick".

"Sick"'s attitude is one of an obvious racist, who fights for his/her race at the expense of others. In contrast, decent non-racist human beings oppose all racism of any kind, no matter who the victims are.

Words of warning concerning the attitude of racists like "Sick" and the Anonymous who was swearing and screaming about damned "colored" people and black people's jobs.

Then they came for the Hispanics and I did not speak out because I was not a Hispanic.

Then they came for the Arabs and Muslims and I did not speak out because I was not an Arab or Muslim.

Then they came for me and there was no one left to speak out for me.

Also, to the Anonymous who said

"Wait one f--king minute!! For your info there ARE people who do offesive shit all the time to black people with you people rarely ever saying a damn thing so the f**k are you kidding?!!"

Who exactly are "you people"? Can you back this up? Or are you flat-out lying and making your own racist assumption about the person who wrote the post? The Anon's and Sick are all hard-core bigots, if not racial supremacists.

There are some seriously stupid people in this world, as reflected by the article and comments.

Jumping to conclusions never helped anyone. Neither did isolating yourself as solely a black person who will only help blacks, etc.

So since I'm mixed, should I stay out of racism-related issues altogether? Nah, I don't think so.

The word "squaw" or esquao is an honourable word. It is a French word meaning "wife" or "woman".

I can't comment on the artist's or the editor's intent. But I too am an "esquao" as were my foremothers. I am proud of being so.

""The Squaw's Appeal," huh? She's "branded" herself with the headdress? What a dopey bitch. Great to know there's a clueless White girl out in Richmond who thinks it's groovy to appropriate Plains man's regalia in an effort to market herself."

I am offended by the use here of the word "bitch" to describe ANY woman, even a woman with whom I may fundamentally disagree.

Really. Who is more ignorant, the ridiculous woman or the utterly ridiculous publisher. It must be hell to live in the South.