Last year I reported on the new Jim Thorpe documentary. Last week I finally watched it on PBS as part of Native American Heritage Month. Here's a synopsis:

Comment:  The summary pretty much sums it up. The documentary is a bit on the glowing side; it begins with the omnipresent flute music and glosses over Thorpe's drinking and spendthrift ways. But Jim Thorpe is a solid look at the athlete's life.

A few things I learned about Thorpe:

The movie doesn't mention Jim Thorpe, Pennsylvania, or the controversy over Thorpe's burial place. That may be for the best. 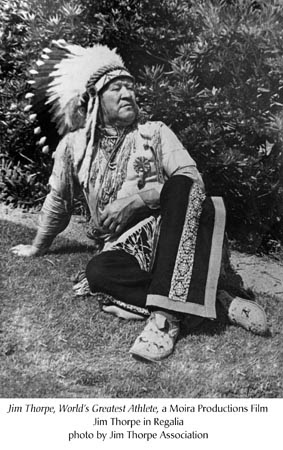 I still liked the Burt Lancaster film and portrayal in "JIM THORPE ALL AMERICAN" - 1951, even though he (Lancaster) is non-native, the film doesn't paint a myth, it shows all the struggles Thorpe went through.

I liked Burt Lancaster in another film where he struggles, but manages to speak Kiowa, "The Scalphunters" 1968 is a Sydney Pollack film that is close, but not nearly as native as "Little Big Man" was to a comedy-western.

It unfortunately uses an Italian as the leading Kiowa warrior role, but the rest of the cast is great with Telly Savalas as the villian, Shelley Winters as his mistress, Ossie Davis as a runaway slave "adopted by the Comanches, and a young Dabney Coleman as one of the scalphunters.

I have a Jim Thorpe post coming in my blog; I keep forgetting to do it.