I saw a TV commercial the other day that demonstrates our myth-making process. It shows what looks like Greek gods in a temple in the clouds. The white goddess Artemis or equivalent shoots an arrow into a pyramid of gold-wrapped chocolate balls and they fall to earth. Here's the accompanying narration:You can see it below. This version is slightly longer than the version I saw, which clocked in at about 18 seconds, but it's basically the same. One website says it was released in November 2007.

Comment:  Only one small problem with this commercial. Chocolate was developed by Mesoamerican Indians, not Greeks. As perhaps the most delicious substance in existence, it's one of their greatest contributions to civilization. Yet this ad attributes it to Europeans, not Indians.

If Ferrero Rocher wanted to use the "gods" theme, why not use Mesoamerican gods? The ad could've gone exactly the same way, but with brown-skinned gods in jaguar skins and feather cloaks rather than white gods in white robes. It would've given viewers exactly the same overt message.

But the covert message would've been different. And that's the point. Beneath its overt message, this ad is telling us that whites are mighty godlike beings. That they've done everything great and noble. That our comfort and wealth (represented by golden chocolate) came directly from the Greeks. That Europe is the source of civilization.

It's ethnocentric if not racist. Yet we're bombarded by messages like these hundreds of times a day. The Marlboro Man and Barbie are normal, representative Americans. Indians are strange, exotic creatures who never appear in the media. Except as savages, werewolves, or shifty casino owners, that is.

Here we see America's mainstream culture in action once again. White Europeans are good; everyone else is questionable. White Europeans rule the heavens as well as the earth. Nothing has changed since the Middle Ages, when white Europeans decided God and Jesus looked just like them.

For more on chocolate, see Chocolate Proves Native Greatness and The First Chocoholics.

Below:  White god gives life (and chocolate) to white man. 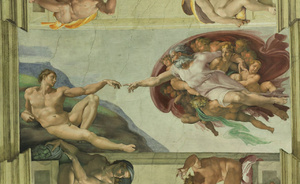 I've seen this ad too, and while I would hope this was the idea of an under-educated member of the marketing team, I do see how the covert message is front and center irregardless.

Geez, they couldn't at least make it hummus or something?

I saw this commercial and I thought they were actually referencing ambrosia, since Ferrero Rocher is a mixture of several things and not just chocolate by itself.

Ferrero Rocher is a spherical chocolate sweet made by Italian chocolatier Ferrero SpA, the producer of Tic Tac and Nutella.

One thing I agree with you for sure is that chocolate (solid form as in a ferrero rocher orb) was not invented by the ancient Greek as suggested by the ad.

The same thing with LCD TVs. LCD technology was first discovered/invented in the West. But it hit dead end around the 70s and only ended up as those tacky lcd watches we all remember. Korean & Japanese inventors are the ones who improved this dead technology 20 years later, in the 90s, to make LCD TVs. I'll say those tacky LCD watches is the West's invention. But I will say LCD TVs come from the East.

Aren't you confusing LED with LCD?

By "flavor" I presume you mean the basic substance that makes chocolate what it is:

Chocolate is a raw or processed food produced from the seed of the tropical Theobroma cacao tree. Cacao has been cultivated for at least three millennia in Mexico, Central and South America, with its earliest documented use around 1100 BC. The majority of the Mesoamerican people made chocolate beverages, including the Aztecs, who made it into a beverage known as xocolātl, a Nahuatl word meaning "bitter water."

In short, the additional ingredients may have come from elsewhere, but chocolate itself is Mesoamerican.

You shouldn't take that commercial so seriously and personally. When the commercial talks about the gods giving chocolate, they're just making an entertaining story that will keep the attention of audience. And more people in America know what Greek gods are so that's the automatic resort. It's called marketing. And they're trying to imply that the actual ferrero rocher candy is so good it possibly came from the gods, not chocolate itself. You are over analyzing everything