In his first comments (above), everything Limbaugh said is false is basically true. Limbaugh doesn't provide any evidence for his anti-historical claims because he can't.

Trying to link Thanksgiving to the Constitution when there's no link is another lie. It's a blatant attempt to smear Obama as un-American.

In his second comments (above), it isn't clear who he's blaming for "socialism." The Pilgrims with their communal society and food-sharing? Then why don't we cancel this socialist holiday and replace it with something else?

The only thing that may be true in Limbaugh's rant is the part about Natives scamming the Dutch over Manhattan. I've heard that before. I believe it's just a speculative claim, not a historically proven fact.

Even if it's true, Limbaugh's mention of it is misleading. He makes it sound as if Natives were scam artists in general. If he had said, "The US scammed Natives thousands of times, but the Natives got even once," then his remarks would be fair. But he didn't say that because he's prejudiced against Indians.

Finally, it's a lie of omission to slam Obama for the same kind of proclamation made by presidents such as Reagan. Like other conservative liars, Limbaugh doesn't care about the truth. He cares only about scoring points against the black man in the White House. 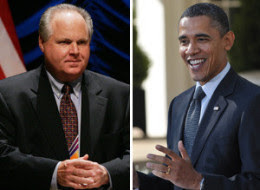 By Limbaughs own standards, he is a drug addict in recovery. You will hear little or no more about Thanksgiving from this guy because as you've pointed out, he cannot back historical claims.

Only white people could have their own show to arouse prejudice and racism. If it were an African American, Latino, Asian or Native, the FCC would never let them get such a wide reaching audience, but someone has to do their dirty work for them.

"Actually, the Indians did help the colonists learn capitalism. Their barter system of trade was a pure expression of free markets, unencumbered by taxes or regulation"

This is true, and contradicts those who denigrate the Natives as socialists. The Natives knew what worked, and had not been bamboozled by Marx's "give the rulers all the power and everything will work out fine" ideology.... something a racist white man created.

Since Adam Smith didn't publish The Wealth of Nations until 1776 and the word "capitalism" didn't come into use until 1854, it's doubtful that the Pilgrims were familiar with the concept. But, ignorance never stopped the BFI.

It's stupid to think of a traditional tribe as a "socialist state." That would mean the tribal chiefs and councils owned the means of production: the land, homes, clothing, food, weapons, tools, animals, etc. In most cases, I don't think that was true. Even if tribes didn't have privately owned land, I think they recognized the concept of private property.

It would be more accurate to compare a traditional tribe to a corporation. Some assets belonged to the organization and some to the individuals. Members had assigned jobs and were "paid" with goods or status when they performed well. Those who didn't perform well were demoted or fired (banished). Decisions within the tribe were made by executives (chiefs) and management committees (councils). Trade between tribes was on a strict barter or money basis with no government oversight.

Most of the wingnuts couldn't explain the difference between a socialist and a gorilla: All they do is parrot what they hear. The comments on the recent Ireland stories were appalling in their ignorance. One after another, Ireland's financial breakdown was blamed on social welfare programs bankrupting a socialist economy.

Ireland has one of the most deregulated economies in the developed world with a notably low corporate tax rate, but that didn't stop anyone from blaming a failure of capitalism on the evils of socialism.

In most tribes, wealth was not always determined by material or ownership of things like lands, property, etc., that is a whiteman concept. Wealth was also determined by feats of bravery and skills in hunting, spiritual power(s) and yes, fighting.

The natives that lived during the mid to late 1800s began to assert leadership based on not only white resistance and wars against white expansionism, but white alliances also.

In other words, peacemakers were valuable to both sides during this time as well as those that held out from assimilating into white society.

There were converts into Christianity and Catholicism in Indian country just as there were those that resisted and kept the traditional way of life. Those are the ones that history and Hollywood concentrated on.

Chiefs were not elected per se by a democratic system of voting because white concepts, values and definitions are different than that of native values.

Families took care of their own hunting and survival needs. There was no central bank or socialized welfare either. When a family member died, sometimes their belongings would be given away; buried with them or burned. There were feasts and celebrations of course that pre-date Thanksgiving.

Some tribes, like Apaches, have extensive and sophisticated lunar and astrological time calendars. There are more words in the Apache languages pertaining to the moon and its cyles than the sun.

It is an insult to try to define native thinking and values through white economic systems.