The kids seem to be doing real dances and songs from real tribes. That would be good...but I doubt they're capable of doing them right. Chances are they're making up the dances and songs rather than learning them from a genuine source.

Is it good to be "learning" a dance like this? Native dances often have deeply symbolic meanings that participants learn over years. Dancers often perfrom only at certain times of the year, after days of fasting or other purification rites. I'd say the actual dance is only the tip of the religious iceberg.

This approach would be like teaching Communion by giving students grape juice and cookies from containers labeled "Jesus." Yes, it would give them a facsimile of Communion, but it would be missing the ceremony's heart and soul. It's a tossup whether you'd call it a genuine learning experience, an unhelpful spectacle, or a flat-out mockery.

Bolstering the point are the other things the article mentions: headbands, beaded shirts, flutes, and drums. These are stereotypes that apply only to some Natives, not all. The Inuit didn't wear headbands and beaded shirts, for instance. Despite the different dances, the kids seem to be learning that all Indians are the same.

As usual, dressing up as Indians also sends the wrong message. It tells kids that anyone can be an Indian. That Indians aren't members of political and cultural groups with a unique place in US history. That Indian traditions are as superficial and meaningless as a child's dancing and drumming.

Below:  A similar "learning" activity. 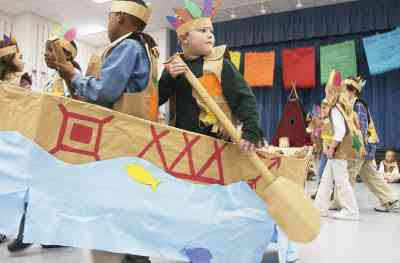 The whole drumming thing is best and effectively accomplished by having an actual tribal drum group drop by and play for the kids, and show them the drums.

I think it is a start in the right direction. Yes, they could not authenticate the dancing and singing, but you are assuming that a child from a particular tribe that starts dancing and singing has no room for error in the beginning, that is simply a learning process.

Whether you are 5 or 50 and learning about your own peoples culture, it should be acceptable that you approach your learning not as a "know it all", but rather someone that is fallible and human.

I agree with your ideas about lore, gardens and medicines because it does not LIMIT their grasp of indigenous people to pow-wows.

If there were more schools out there that not only harbored this approach to native peoples, but also included African American, Asian, Latino and even European cultures, this country just might be able to resolve alot of its racial ignorance and strife from within, something that would make America truly unique and actually fulfill its currently overrated patriotic rhetoric proclamations as being a great civilization, until then, patriotism remains guided by religious zeal, greed and militaristic might!

No, Burt, you're assuming that the teachers are teaching the actual dances. (Rather than just saying "dance like a bear" or "wave the ribbons around.") That the teachers know enough to correct the children's inevitable mistakes. And that this is part of some long-term learning process rather than a one-time event.

I don't assume any of these things. That is, I assume they're not true until proven otherwise.