Here's a comic book from September 1970 that was impressive at the time and still looks pretty good compared to today's comics:

One critic liked it well enough:

But blogger Brian Cronin nominates its climax as the second goofiest moment in the first 10 issues:

Comment:  Yes, Green Arrow's approach is extremely patronizing. On the other, it's possible a group of mild-mannered Indians might be unwilling to fight a powerful businessman. And only one Indian takes the "ghost" seriously; the rest scoff at it.

1) The story takes place in the Pacific Northwest--note the pine trees. But Green Arrow dresses up as a stereotypical Plains chief. The Indians should've shouted, "You can't be the ghost of Ulysses Star because you don't look anything like him."

3) The Indians have dark pink skins. Which was kind of par for the course in comics back then. Asians usually had yellow-brown skin. Only blacks were rendered with reasonable accuracy.

For a truly goofy moment in this comic, you have to go to the cover: 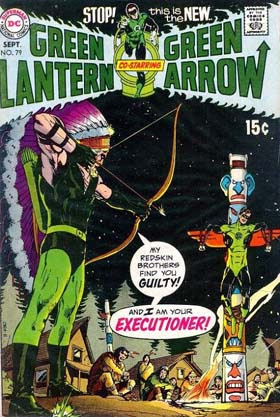 It's a symbolic moment that doesn't happen in the story, but it's still stupid. Green Arrow wears a full headdress from a culture located hundreds of miles away. He uses the slur "redskin." The Indians wear traditional buckskins and feathers around a campfire even though they're seated near wood-frame buildings.

Perhaps worst of all Green Lantern is tied to a totem pole with fearsome human faces. Totem poles usually feature animals that tell a story. They aren't random collections of scary little men.

With GA acting like a savage Indian chief and GL tied to a savage-looking totem pole, guess what the message is. Yes, that Indians are savages, again.

Even as a plains outfit, the belt isn't exactly accurate, but more in line with the Comics Code. Apache Chief wears something similar, but basic brown.

Green Arrow: And I would've gotten away with it, too, if it weren't for you meddling kids!