Our right-wing Supreme Court justices give me another chance to ridicule them:

The ruling in the suit, filed on behalf of as many as 1.5 million female employees, may all but end big class-action cases that seek money from employers for discrimination.

By David G. SavageComment:  So let me get this straight: If a company has a written policy saying women are inferior and deserve less pay, that's illegal. But if the company produces the exact same results through unofficial winks and nods, that's legal.

In related news, the Supreme Court tossed a class-action suit by American Indians against the US government for its history of genocidal actions. Writing for the pro-extermination majority, Scalia said there was no written policy stating "kill the Indians" or the like.

"In a country of the United States' size and geographical scope, it is quite unbelievable that all officials would exercise their discretion in a common way without some common direction," Scalia said. "Significant proof that the US government operated under a general policy of discrimination is entirely absent here."

Yeah, I can't imagine millions of greedy, selfish Americans persecuting Indians with the tacit support of the US government. According to Scalia, it couldn't have happened. It's a figment of the Indians' imagination and no legal action is necessary.

A couple of people added comments:A good lawyer might argue that those were the work of rogue officials. That they didn't represent an official policy at the federal level.

But yes...federal, state, and local policies along with court rulings and military decisions all conspired to eliminate Indians. Scalia's demand for written proof is, once again, a dodge to shield wealthy exploiters from harm. The evidence for genocide is tens of thousands of irrefutable results, not a written policy.

For more on the subject, see Slaughtering Buffalo = Genocide and Boarding Schools = Holocaust? 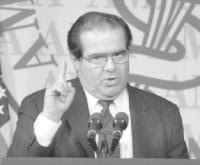 This is a great example of a baseless lawsuit. Only a tiny fraction of the "plaintiffs" are actually participating in this. The rest are being "defended" againt their will by crooked attorneys.

Strip the lawsuit of any plaintiff who did not choose to proceed, and go on from there. As for now, justice has prevailed.

Scalia makes Serdar Argic look like a, how did Argic put it, a gum brain.

Every court except the far-right Supreme Court thought the lawsuit had merit, DMarks. So your "baseless" argument is, well, baseless.

With your pro-business bias, I guess you oppose all class-action lawsuits. Only those who can afford a lawyer can sue, and only one by one. The rest can suffer sexism and discrimination. That's the typical social Darwinism of an un-Christian conservative.