Comment:  Of the 12 covers, six show a stereotypical toy Indian chief or warrior. All six are brandishing weapons: a spear, bow and arrow, or rifle.

Another one shows a cartoon Indian with feathers in his hair along with a tipi and spearpoint. And another shows a boy with a shadow Indian.

So that's eight of 12 covers with a stereotypical Indian on them. Wow.

Yes, you could try to justify these stereotypical Indians. For instance:


But let's go to our tried and true test of stereotyping. How often do young-adult African American novels feature a 19th-century Zulu chief or warrior on the cover? How often is a black protagonist's identity so in doubt that the cover has to reference it?

What other ethnic group has to ask and answer the implied question: Are we really primitive people from the distant past? No, as this book will prove, we're actually modern people. We live in houses, wear glasses and t-shirts, and play basketball just like everyone else.

In short, the possible justifications for the covers are beside the point. The fact that the covers exist suggest the sorry state of Natives in America. Blacks are no longer slaves and Asians are no longer coolies, but in most people's minds, Natives are still savage warriors. In other words, the humanity of Natives is still an open question. 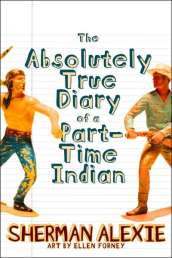 Unfortunately, book covers have been a thorn in the side of many a writer for years.

Just a couple years ago, Justine Larbalestier dealt with the issue of race for the US cover of her book Liar. In this blog post she links to other articles that talks about the stereotypes and white washing of book covers. It continues to be a hot topic even today. And sadly, authors don't have much say in it.