I don't think I've posted about Tupac Shakur before. Here are the basics about him:

Tupac ShakurThis came up because someone asked the following question on Facebook:I don't know about his music, but his parents were Black Panthers. They clearly saw a parallel between the Inca stand against European conquest and their stand against American racism and oppression.

Actually, I thought Tupac was named for Tupac Amaru:Not his descendant Tupac Amaru II:I guess his parents were really going for the "mythical figure in the struggle for independence and indigenous rights movement" thing.

For more on black-Indian connections, see Thoughts on IndiVisible and Virginia Classified Indians as Blacks. 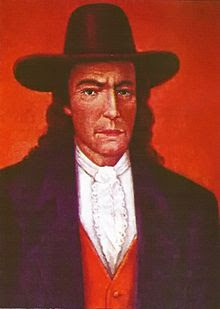 His mother still lives in Cuba.

"and their stand against American racism and oppression."

Unfortunately, if you look at the facts about the old Black Panthers, they fought FOR oppression.

Maoism has turned out to be the most genocidal of the forms of socialism. It's completely undemocratic and typically requires the extermination of large percentages of the population. Sorry, a group fighting to bring this to the United States is nothing more than a very bad hate group.

And Anon, it is not surprising that given the nature of the Black Panthers, Tupac's mother is embraced and welcomed by one of the worst fascist regimes in the world.

One that is interestingly enough a white power paradise. The white Castro family enjoys absolute power, while more than half of the population is black.