How the US honors Indians

Here's an idea. The NCAI or a group of wealthy tribes could place an ad in the newspaper of every city or college with an Indian mascot. The ad's imagery would contrast "proud" and "noble" mascots with real Indians huddled in poverty-stricken homes. The message:

If you want to honor us, pass a resolution denouncing the Bush administration's budget cuts in Indian country. Demand that your Congressional representatives go on the record opposing illegal wars and immoral tax cuts that hurt Indians. If you don't do this, your claims about "honoring" us are false and hypocritical. If you're going to violate your treaty obligations to us and make us suffer, we don't need or want your phony "honor."

A campaign like this would garner a lot of media attention. It would raise the profile of Indian issues throughout America. It would use America's beloved mascots to make a point: that Americans don't honor actual Indians. 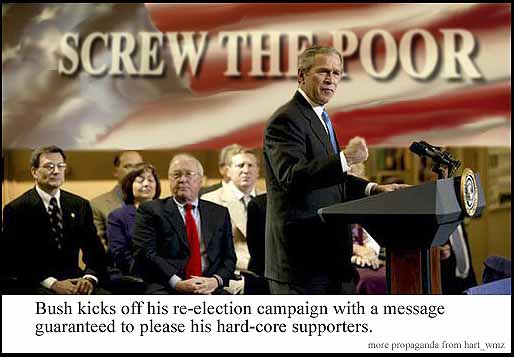 The tax cuts (most of which go to the middle class), certainly aren't immoral and don't hurt Indians. Since Natives do in fact pay taxes, the tax cuts help Indians instead.

To increase tax rates would be nothing more than greed. The government has plenty of money for these things already.

Fixing "disrepair of schools, jails and health" sounds like public works, right? We could start by repealling Davis-Bacon and as a result pay a lot less for contracts for such things (by paying the fair value instead) which would free up a lot of money to actually get the job done.

A "campaign like this" you mention would be better if it did not include a demand for even worse greedy overtaxation or surrendering to terrorists halfway around the globe. There's no need for pointless greed.

And I just heard that the Census department wasted $2 billion on PDA-type devices that are broken. The BIA budget for 2007 was $2.2 billion. By just cutting the waste on this item alone, the BIA budget could be nearly doubled. No need at all to increase tax rates.

A portion of the so-called middle class is what the rest of us would call "rich." More important, even if Bush's tax cuts include the middle class, they skew toward the rich--especially when compared to previous tax cuts. That makes it legitimate to call them tax cuts for the rich.

Whether they're immoral is a judgment call, and I judge that they are. We have a constitutional obligation to fulfill our treaties with Indians and we're not doing it. Not fulfilling our obligations--instead giving the money to the well-off who don't need it--is the epitome of immoral.

You want to reduce waste? Fine, but that's much harder said than done. Governors and presidents routinely claim they're going to do it and they routinely fail to produce significant results.

This doesn't even address the issue of our immoral and illegal war in Iraq. No president in the history of the US has cut taxes while waging war--until George "Dumbya" Bush. It's absolutely immoral of him to increase the national deficit and make future generations pay for his folly. If he and his fellow conservatives want to kill foreigners, let them pay for it now.

As for "surrendering to terrorists," don't be silly. There's no conceivable way terrorists could defeat the United States, and thus no reason we'd ever have to surrender. If you believe otherwise, you're not thinking rationally. You've been listening to too much Bush-league propaganda.

In fact, there's no conceivable way to fight a "war on terrorism," since terrorism is a methodology and not an opponent. Nor is the present war producing the desired results. Terrorist attacks are up since Bush invaded Iraq, which is testament to his stupidity. He was too stupid to understand the August 2001 memo warning of an attack, too stupid to capture Bin Laden at Tora Bora, and too stupid to plan for the reconstruction of Iraq.

After the tax cuts, rich individuals pay a higher percentage of their income than the middle class (or poor). So it is not skewed toward the rich.

"Not fulfilling our obligations--instead giving the money to the well-off who don't need it--is the epitome of immoral."

I agree. And this is a change of subjects. Tax cuts do not give money to anyone.

"So let's use the tax money to pay our legal obligations to Indians, then cut the (possibly illusory) waste"

I sort of agree. The obligations must be met immediately. But that is no reason to put off cutting waste.

"What's your justification for cutting taxes while waging war?"

Might as well ask what is the justification for cutting them while Congress is in session, while Air Force One is in the air, while the President is on vacation, or any other status of government/leaders.

Families earning more than $1 million a year saw their federal tax rates drop more sharply than any group in the country as a result of President Bush’s tax cuts, according to a new Congressional study.

The study, by the nonpartisan Congressional Budget Office, also shows that tax rates for middle-income earners edged up in 2004, the most recent year for which data was available, while rates for people at the very top continued to decline.

Based on an exhaustive analysis of tax records and census data, the study reinforced the sense that while Mr. Bush’s tax cuts reduced rates for people at every income level, they offered the biggest benefits by far to people at the very top—especially the top 1 percent of income earners.

A change of subjects? No, I've consistently stayed on topic. Tax cuts take money we legally owe to Indians and give it to people we don't legally owe it to: well-off taxpayers.

FYI, your taxes are the price you pay to be a citizen of this country. That price includes paying our collective debt to the people we owe money to. If we wanted to, we could figure out how much each taxpayer owes each Indian.

That amount isn't yours any more than the money you owe on a mortgage or car loan. You may have temporary possession of the money, but it isn't yours to keep. Legally it belongs to the lessor, not the lessee.

P.S. I discussed our obligation to pay taxes in Are Taxes "Theft"? almost 15 years ago. For more on the subject, read it.

Your example of cutting waste isn't persuasive, either. Any large-scale project is going to make mistakes. Imperfection is an inescapable part of any human endeavor.

What you're saying is like saying Apollo 13 was a waste because it didn't land on the moon. We should've skipped from Apollo 12 to Apollo 14 and saved the money. But unless you were the Oracle of Delphi, you couldn't have predicted that failure. The best minds on the job thought Apollo 13 would succeed.

When we talk about government waste, we usually mean expenditures that anyone could see weren't necessary from the start. Not expenditures that seemed like a good idea at the time but turned out to be a mistake. Your example falls into the latter category, not the former. Try again.

As for cutting taxes during wartime, don't be silly. The three things you mentioned are trivial compared to the cost of running a war. We're talking an order of magnitude of 1,000 or 10,000 if not 100,000 or a million.

Let's use your "logic" to examine your position.

Because one expense is 10,000 times greater than the other, I have to plan and budget for it. The same goes for the second-longest war in US history (Iraq) vs. Bush's annual vacation. The cost is so large--heading toward $3 trillion and counting--that it affects (or should affect) every government decision.

If you can't see the difference between a $3 trillion expense and $3 million expense (e.g., a flight on Air Force One), you must not know economics very well. In that case, you can take my word for it, since I have a BA in mathematics and an MBA. One expense is a million times greater than the other and therefore a million times more significant.

If you think Bush's actions aren't immoral as well as unsound, explain why he's hiding his wartime expenditures in off-the-budget supplements. Why not make them part of the regular budget and proclaim them proudly? I'll tell you why: because voters would throw Bush out of office if they understood how much money he's wasting in Iraq. If they understood how morally bankrupt he is.

They already understand to some degree, which is why Democrats trounced Republicans in 2006. And why Bush's approval ratings are at historic lows. The public understands that Bush has squandered the Clinton surplus on his stupid and unnecessary war. He's likely to go down as the worst president in history because of it.