Wamapoke wedding in Parks and Recreation

In this week's episode of Parks and Recreation, 94 Meetings (airdate: 4/29/10), Leslie Knope tries to save a historic gazebo. Standing in front of a mural, she explains the gazebo's importance:The mural shows a Plains Indian chief and a white woman standing before a reverend in the gazebo.The camera pulls back to show the rest of the mural. On the left are Plains chiefs and warriors shooting arrows and throwing tomahawks. On the right are US Army cavalrymen, one waving a sword, and settlers shooting and throwing things. One Indian is skulking on top of the gazebo.Portraying Indiana's Indians with Plains stereotypes is just plain wrong, of course.

The scene doesn't apportion blame for the alleged bloodbath, but the mural gives more space to the violent, weapon-wielding Indians. The casual viewer will conclude they're the aggressors.

A page on the faux Pawnee website refers to a similar incident. It could be the same incident, but the lovers' genders are reversed. In any case, the website confirms the show's flippant attitude toward Indians. People killing each other over Euro-American imperialism...ha ha.

Amy Poehler, the creative force behind Parks and Recreation, is building quite a track record on Indians. Unfortunately, it isn't a positive one.

There are these incidents in the series:

Her Palin rap during the 2008 presidential campaign:

And this picture of her in a hipster headdress: 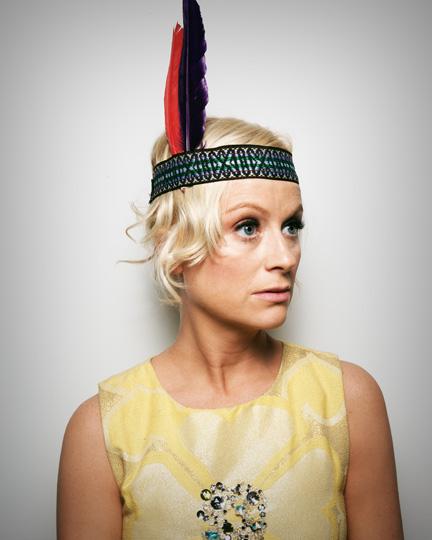 I wonder if this is the liberal equivalent of the conservative view of Indians. She doesn't come out and call them "savages," "drunks," or "lazy bums." But she appears to believe the most common stereotypes. Judging by the evidence, she's no more informed than the average ignorant student.

She may think she's helping or "honoring" Indians by including them in her show. But her tone is condescending, along the lines of: "Look at those quaint, colorful characters with their strange customs and clothing." It's the unconscious racism of a Stephenie Meyer or Hollywood exec rather than the conscious racism of a Pat Buchanan or Jim Marino.

For more on the subject, see TV Shows Featuring Indians and US Report to the UN on Racism.
Posted by Rob at 5:18 PM

Says the idiot who can't even write proper English. Let us know when you have something intelligent to say, dumbass.