By Lisa SnellComment:  For more on the subject, see Reel Injun Interview and All About Sacheen Littlefeather. 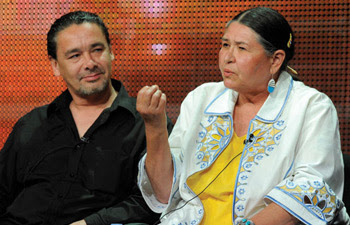 I have heard she is not Native. Is this true?

I believe she is Native:

Contrary to misinformation which has been published on the internet, Sacheen Littlefeather is indeed of true Native American Indian descent. Sacheen was born Marie Cruz in Salinas, California. Her mother is French-German-Dutch, and her father was from the White Mountain Apache and Yaqui tribes from Arizona. "Cruz" is her father's recognized tribe name. Sacheen took the name "Sacheen Littlefeather" after high school to reflect her natural heritage. She is not a "Mexican actress" as Roger Ebert incorrectly reported.