By Carol BerryComment:  I'd say there's no chance of this happening. It would make Obama look too weak to the right-wing ideologues who have said their only goal is to take him down.

For more on the subject, see Presbyterian Churches to Apologize to Indians and Brownback Reads US Apology. 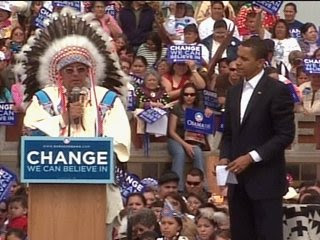 I agree that there will be no formal recognition of atrocities for natives from Obama. You are looking at a man that cannot even take a step or breathe without the right wing machine there to scold and place a dunce hat on him in the corner.

The symbolism of electing a black president may seem powerful to those fooled, but history is ripe with examples of just how much leadway minorities are given in the media, congress and the ever fickled public opinion when it comes to making real decisions that will tests the powers that be.
I am also very certain this president will not pardon Leonard Peltier also, which was all I would have hoped for in a lame duck presidency.
It is not only Obama that is weak. It is the whole democratic leadership that behaves politically impotent. As dumb and inarticulate the former president Bush was, he pushed executive powers past the limiitations of a dictatorship and then some, because Bush and Cheney have insured their friends and families fiancial fortunes at the costs of American blood and poverty for possibly the next 100 years.

And every bounce doubles the deficit.

Obama can never equal nor catch up to Bush/Cheneys deficit for this country Dmarks.

Like most conservative pavlov dogs, you can react swiftly and without thought to every dime of domestic spending calling it liberal or labels that have absolutely no bearing on whether money is red or blue, for it doesn't matter. Debt is debt whether you actually believe your president is spending it to spy on you; traveling the world; thinking he is fixing health care or expanding profits for the defense industry, it is all deficit and "socialized".

Nobody cared when the US government spent millions to build Indian boarding schools; dole out unhealthy USDA commodity foods to tribes that initiate(d) high diabetes, obesity and heart disease; many non-natives that did protest against that spending simply wanted Indians to be exterminated, period. It wasn't just, "kill the Indian, save the man" it was more like "kill the Indian and the man".

Until you see no lines drawn between political thought and ideology; picking sides is just what the rich want to stay in power and working people will continue to pay for a welfare system for the rich. How can you not see this? Are you one of the rich 1% that run this country and if you are, you should go overseas and fight and die for oil as you so firmly believe.

It is so easy to join ranks with the populists right and account for every square toilet tissue Obama spends to wipe with while the former president smiles around the country selling his memiors you so badly need and want to believe Saddam Hussein is still alive with Elvis and the weapons of mass deception.

How much longer will you really think Obama has spending power Dmarkss compared to the president before him? Where is your brain?

"Obama can never equal nor catch up to Bush/Cheneys deficit for this country Dmarks."

The facts contradict you. Obama-era deficit spending has so far been on a rate to be more than double that of Bush-Cheney. Check the figures.

The only caveat is now the improvement in Congress which will blunt a lot of the excess.

"Like most conservative pavlov dogs, you can react swiftly and without thought to every dime of domestic spending calling it liberal"

No, I actually went to Federal budget sites, including the one run by Obama, and found the year by year figures.

You are right about one thing, debt is debt. But the rest about traveling, spying, is pointless. Debt is debt, and dollar figures do not lie.

Now you are being silly. You have an axe to grind with me on this issue. Sorry to take the wind out of your sails, but I dislike those programs too. (except maybe the food one: no one forces anyone to eat the food).

Well, I opposed these bialouts, which were the biggest examples of welfare to the rich and corporations ever. And most Republicans in Congress opposed this, too.

"you should go overseas and fight and die for oil as you so firmly believe."

No one has gone to die for oil.

"It is so easy to join ranks with the populists ...while the former president smiles around the country selling his memiors ..."

Sorry, you are making a failed attempt to connect the current waste spending problem to books past politicians write. Nothing to do with anything. Former Presidents write books. The sun rises and sets.

"How much longer will you really think Obama has spending power Dmarkss compared to the president before him? Where is your brain?"

Obama has been in power for close to two years. His spending rate is more than twice that of Bush-Cheney, and this can be projected out. He's on track to preside over the same amount of deficit spending in 4 years as Bush-Cheney did in 8.

Steeped in the facts on this issue; that is where my brain is.

DMARKS SAID: "no one forces anyone to eat the food"

You may find this hard to believe, but in the beginning, natives were issued food rations. Some of it very unhealthy and even rotted.

Its a cold and callous remark to tell a starving child that "you don't have to eat it".

Some natives resorted to eating their dogs and horses to survive while many simply perished.

Some foods, including frybread, were the result of a quick and easy way to cook with the government issued oil and flour in case camps had to be moved from being wiped out.

You are sounding more and more like Rush Limbaugh Dmarks, how do you even want to make a remark like that during Thanksgiving?

Did it ever occur to you that this remark about not being forced to eat food might have happened in concentration camps as well?

So you are saying that in 2 years, Obama has had the political cout and power, congressional backing and the American people's uppport to spend, spend, spend?

And that Bush's 8 years in the Whitehouse created no debt close to Obamas two years?

Your also convinced that the Patriot Acts cost was nothing and that surveillence on the American people like wire taps, librarys and bookstores forced to share information on American citizens costs nothing at all?

No one has gone to die for oil?

Are you that naive son? This really shows your lack of military service.

So you are saying that in 2 years, Obama has had the political cout and power, congressional backing and the American people's uppport to spend, spend, spend?

THE CORRECT WORD HERE IS "CLOUT" AND NOT COUT FOR THOSE THAT MIGHT BE CONFUSED!

Here are the facts on the national debt:

The story of today’s deficits starts in January 2001, as President Bill Clinton was leaving office. The Congressional Budget Office estimated then that the government would run an average annual surplus of more than $800 billion a year from 2009 to 2012. Today, the government is expected to run a $1.2 trillion annual deficit in those years.

You can think of that roughly $2 trillion swing as coming from four broad categories: the business cycle, President George W. Bush’s policies, policies from the Bush years that are scheduled to expire but that Mr. Obama has chosen to extend, and new policies proposed by Mr. Obama.

The first category—the business cycle—accounts for 37 percent of the $2 trillion swing. It’s a reflection of the fact that both the 2001 recession and the current one reduced tax revenue, required more spending on safety-net programs and changed economists’ assumptions about how much in taxes the government would collect in future years.

About 33 percent of the swing stems from new legislation signed by Mr. Bush. That legislation, like his tax cuts and the Medicare prescription drug benefit, not only continue to cost the government but have also increased interest payments on the national debt.

Mr. Obama’s main contribution to the deficit is his extension of several Bush policies, like the Iraq war and tax cuts for households making less than $250,000. Such policies—together with the Wall Street bailout, which was signed by Mr. Bush and supported by Mr. Obama—account for 20 percent of the swing.