By Todd "Turbo" WatsonAfter Uncertainty, a Moment of Triumph in the Situation Room:  ‘We’ve IDed Geronimo’

By Michael SchererCuriously, Time has changed the quote from "We’ve IDed Geronimo" to "Visual on Geronimo." To me this makes it even more clear that "Geronimo" was the target. Whether someone uttered the first quote, the second, or both, he was referring to bin Laden. Bin Laden was "Geronimo." 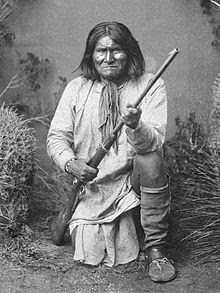 [The link showed nothing other than a cropped version of this photo and the single line of hypertext. The page was removed a few hours later and the link no longer works.]

As President Barack Obama and his team sat on tenterhooks in the Situation Room, the CIA director Leon Panetta broke the silence with the memorable words: "We have a visual on Geronimo."

Comment:  The direct quote from Leon Panetta, following the other bits of evidence, seems conclusive. Bin Laden was codenamed "Geronimo."

Which genius thought of this codename? I look forward to the next terrorist labeled "Chivington," "Custer," or "Jackson."

As I said to Native journalist Rob Capriccioso, who's looking into the matter, "If you get a spokesperson, ask how many other racist codenames the US military has in its repertoire."

There's absolutely no truth to the rumor that Ayman al Zahawiri, the new Terrorist no. 1, has been codenamed "Harriet Tubman," "Cesar Chavez," or "Malcolm X."

Just wondering...will the first book or movie based on Bin Laden's death be called Codename: Geronimo? Or How the US Killed Geronimo: The Terrorist, Not the Indian?

In related news, US Considers Aboriginal Groups Threats. The Pentagon thought about naming them after Indians. But then realized, "Wait a sec, they're already Indians."

How about naming one of our sports teams the "Al Qaeda Terrorists"? Too soon?

Eventually, we should "honor" them for valiantly fighting for what they believe in, right?

I guess this explains why Obama didn't talk about national security at the first tribal summit. The whole "Bin Laden as Geronimo" thing might not have gone down well.

I wonder if the US used Apache helicopters to kill "Geronimo." Another reason why Indian names don't belong in the military.

There's no truth to the rumor that the next anti-American terrorist who tries to destroy the Union will be codenamed "Robert E. Lee."

US backtracks on racist slur

Now people are saying Operation Kill the Terrorist was codenamed Operation Geronimo. As if that's totally different, or better.

The operation to finish off Al Qaeda will now be named Operation Martin Luther King Jr. Because it will bring peace to the world. Yeah, right!

Too bad a thousand blogs already have reported that Bin Laden was codenamed "Geronimo."

Here's what the mainstream media is now saying:

But suppose they'd named only the mission "Geronimo"? The mission to kill an anti-American terrorist? I don't see how that would be significantly better. The offense is associating Geronimo with terrorism. The details don't matter.

I suspect CNN is trying to cover its ass after reporting the "codename Geronimo" business. It's probably regurgitating spin from the White House.

The official spin: "We thought: If we're going to kill someone, 'Geronimo' is a great codename. It has nothing to do with the target being a killer. See the difference? Americans are the bloodthirsty, murdering savages here, not bin Laden."

Wow, thanks for making that clear, people. When someone is planning to execute someone else, "Geronimo" is a good codename to use. But that doesn't imply anything negative or stereotypical about Geronimo? R-i-i-ght.

For more on the subject, see Obama Gets Osama! and Seminoles Compared to al Qaeda. 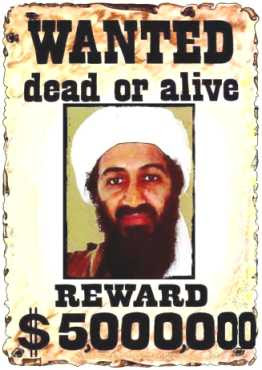 I yelled at the TV when I first heard this. Not that anyone listened. But, seriously, WTF?

Have a look at the "A Good Day to Die, The Dennis Banks Documentary" Facebook page. There is an interesting discussion about this. Apparently the name was given because tactics that Geronimo (recognised as a military strategist as opposed to blood thirsty savage) used would be needed to catch Bin Laden.

Rob - really good points and really pleased to see you making them. I too was horrified at the military's choice of codename. It seems to me a deliberate choice to demonstrate continuity of White (sic) victory over Savages. To equate an iconic leader of the struggle for survival of the Native American peoples with OBL - who represented no-one but his own tiny clique - and who attacked all Americans - is a monstrous insult to Geronimo and Native Americans.

Until then, we cannot whine about being disrespected unless we do something about it. Charge, fee, penalize and fine everything and everyone that uses native culture for profit and exploitation.

I would go as far as charging states, counties, monuments, roads, rivers, corporations, sports mascots, governments and municipalities for the use of native words and icons.

It can be done. If artist and corporations can penalize for copyright infringement, why can't tribal governments?

In a capitalists society, money is the only language we understand. When you break the law, whether a big corporation or a homeless man, you pay money.

Where does it end? Some lying attorneys trump up some group of aggreived Turks and they sue the Trojan condom company to remove that name?

And hey, might as well name New York to "One Big City on Earth" to avoid paying the lazy slobs in York, England who demand payment for it. Oh wait. Earth is, I believe, a Greek word.

Best not name a thing at all.


Do what Rob does instead. Educate.

We don't know exactly why the US chose the codename, Jaine. What you read was speculation, not fact.

I covered some of this speculation in Why US Chose "Geronimo" Codename and subsequent postings. Note that we clearly applied the name to the target, bin Laden, as well as the mission. That argues against the "tactics we needed to catch him" theory.

I agree with this in theory, but I don't think tribes can do it in reality. You're ignoring the courts' demonstrated antipathy toward Native issues. And the potentially huge backlash against Indians for trying to assert their rights.

All in all, I have to agree with DMarks. My approach is the best one. <g>

"And the potentially huge backlash against Indians for trying to assert their rights."

As if the extreme views espoused by that Anon have anything to do with "rights".

Such as "copyright of cultural practices"... shudder.

Yeah, imagine if we had what anon wants.

Then the Catholic Church could file frivolous lawsuits against other Christian sects. Then some Orthodox Jews could get together and sue the Pope for Jewish practices and heritage in Catholicism. They could also sue Islam and force it it to remove Jewish-influenced parts of the Holy Quran and Islamic practice.

Yes, "The use of names, cultural practices and words will always be exploited..."

...and perhaps they can figure out which language of the Indo-Aryan language group is the most original, and speakers of this language could demand to collect royalties on those who speak other derived langauges. There goes your blog, Rob.

It's so easy to see why this idea in any form is so very bad.