NYC’s Most Dangerous Callers to Talk Radio give The RIGHT Perspective on their own show!


Obama Signs Black, Beringian Farmer SettlementComment:  This is a standard conservative report on the Cobell settlement...except for the word "Beringian." Not "Indian" or "Native American," but "Beringian." That presumably refers to someone who came from the Bering Strait, who crossed it from Asia to America.

Really? I thought I'd heard it all before, but that's a new one. I might've seen it before in a random forum posting--perhaps one on the origins of people in the Americas. But in a straight news report? No.

Way to go, TheRightPerspective.org. Excellent example of how conservatives mock and attack Indians as part of their racist politics. According to this site, Indians aren't the original Americans or first Americans. They're foreigners, immigrants, just like everyone else.

The obvious implication is that they don't deserve any "special rights"--despite their unique position being codified in the US Constitution. So no sovereignty, no treaty rights, no gaming for them. I bet these conservatives think Indians should just give up their cultures and become white like Palin's "real Americans."

I can't be sure these people are racists. That is, nothing else in this posting is blatantly racist. But here's a question: Since they call Indians "Beringians," what do they call white Americans? "Europeans"? "Euro-Americans"? "Invaders"? "Conquerors"? "Newcomers"? "Johnny-Come-Latelies"? Or...?

Unless they use equally pejorative terms to identify Native and Euro-Americans, they fail the test. This failure would mean they're discriminating by race. That would make them racists by definition. I'm guessing that's exactly what they are.

The stereotype here is that Indians are just another minority group of immigrants like blacks, Latinos, Asians, et al. (I'd say whites too, but these conservatives probably believe whites were here first.) It's a disingenuous attempt to rob Indians of their rights.

In reality, American Indians and Alaska Natives have political rights that no other minority group shares. Regardless of when they came, they established sovereign entities with territorial rights before (most) Europeans arrived. No amount of Orwellian wordplay will change that basic fact.

For more on conservative racism against Indians, see:

And many, many more.

Below:  Look, it's Captain Picard! That proves Europeans were here first and Indians have fabricated the hemisphere's history with the help of bleeding-heart liberals. (For my less intelligent readers, note the heavy sarcasm.) 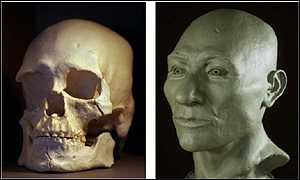 Though the intent is a lot worse, "Beringian" ranks up there with "Novamundian".

dmarks: Both are virtually impossible to say too. And this from a regular Lovecraft reader used to names like Shub-Niggurath, Cthulhu, Yog-Sothoth, and the like.

I like the word "Vogons" from the film, "HitchHikers Guide to the Galaxy" when I refer to bureaucrats. Even when the bad guys are getting away, they'll stop and still take a lunch break.

Its amazing how these people take the mental energy to label Indians this way and still manage to find intelligence in George W and Sarah Palin?

How do you define a people that have occupied a continent for possible tens of thousands of years and yet your own bloodline can potentially be traced to less than a hundred years to another continent?

A phenomenon I call the Limbaugh/Beck syndrome.

Anon: You forgot Nyarathotep and Azathoth. Yeah, I probably know those names at least as well as you do.

You lefties are real good at calling others names: "white supremacist," "racist," "hater," and, a bit lower down, "cracker" and "honkie." (Twice, with truly zero provocation, on the Boston subway, the "T," I was called "cracker.")

It must hurt when we Native Americans of European heritage play the name game right back at you. "Beringian," however, is factually accurate, unlike the bigoted epithets your kind spews. The Asiatic invaders who genocided the Solutreans did indeed come across the Beringian land bridge....from ASIA.

So, yeah, they WERE immigrants, very VIOLENT racist immigrants who holocausted whites.

And guess what? The Anasazi truth, someday soon, will REALLY ruin your day....

As for your other comments, I've addressed them all before.

Who came to America first:

Whether Indians were as warlike as Europeans:

Indians in War Before Civilization
"Something you never hear" about Indians?
Warlike Indians

And the Anasazi's alleged cannibalism:

In short, tell me something I don't know. You haven't done it yet.