The Savage in Bonanza

Unlike the other episodes of Bonanza I've reviewed, The Savage (airdate: 12/3/60) is plainly stupid. For a detailed synopsis, see Pictorial Synopsis: The Savage. Most of the online summaries are partially incorrect, including this one, so I'll tell you what happens and why it's wrong.

Two white trappers enter a Shoshone burial ground because it contains the best fur-trapping west of the Mississippi. Which is ridiculous because they're in an arid mountain area devoid of running water. It doesn't matter because two Indians kill them for their effrontery.

The two Indians are part of a party led by Chato. The credits call Chato "Chief" but he's a shaman, which is still incorrect. "Medicine man" probably would be the correct term.

Chato sends his two sons into the Mountain of the Dead, the Shoshone burial ground, to contact White Buffalo Woman. They need her help to cure the illness devastating their tribe. Chato doesn't expect his sons to come back alive, but they're desperate for her help.

Meanwhile, Adam Cartwright is passing by on his way to see a windmill. He sees the dead trappers, then hears an Indian calling for White Buffalo Woman. He watches as a blond woman in Western dress appears.

The Indian implores her to help his tribe, but she refuses. He grabs her arm and realizes she's a flesh-and-blood woman, not a spirit. He threatens her. Adam intervenes and kills the two Indians, but not before one of them wounds him with an arrow in the leg. 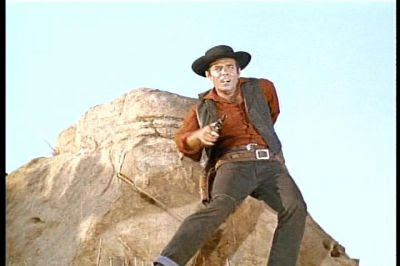 I don't know anything about Shoshone burial practices, but I doubt the Mountain of Dead thing is real. Anyway, that's not a big deal. The real problem is the so-called White Buffalo Woman.

1) The Shoshone Indians have been in contact with white people for decades--at least since the Lewis and Clark expedition. But they think a white woman is a supernatural being? Why, because she lives on the Mountain of the Dead without being struck by lightning? Or what, exactly?

She doesn't appear out of nowhere, float in mid-air, or conjure things. In fact, she looks exactly like a standard pioneer woman. Why wouldn't the Indians consider the possibility that she's mortal? Because they're primitive and superstitious and can't think rationally, I presume.

2) Why do they call her White Buffalo Woman? Because she's a white woman, which is similar to a white buffalo woman? The supernatural being is a "White Buffalo" Woman, not a White "Buffalo Woman." It's idiocy to equate one with the other.

3) As Adam correctly notes, White Buffalo Woman is a "spirit woman of the Plains Indians." So what the heck are the Shoshone Indians of the Lake Tahoe area doing worshiping her? After Adam points out this glaring flaw, the episode ignores it. Did Bonanza's writers think western Nevada was part of the Great Plains?

The woman, whose name is Ruth Halverson, nurses Adam back to health. He takes to wearing a headband for no discernible reason. Perhaps it's to show he's living primitively, getting closer to nature, like an Indian. 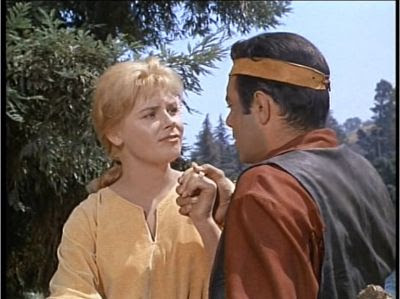 Ruth tells Adam her story. She was a girl in a Norwegian immigrant family that headed west from Missouri. Her father disappeared and Bannock Indians captured and raised her. White hunters killed the Bannocks, leaving her to live alone. She preferred the solitary life because she had no one left.

Is Ruth supposed to be the savage of the title, or is Adam? Either way, the generic title doesn't fit the episode. It's even less fitting than The Last Hunt.

Adam and Ruth fall in love for no discernible reason--perhaps because they're the only two white persons for miles around. Adam proposes to Ruth, which means the relationship is doomed. She'll be lucky if she gets out of the episode alive.

Two Indians enter the Shoshone village of tipis (wrong). They go to the "shaman" (wrong) to tell him his sons are missing. Wearing a buffalo helmet (wrong), the shaman says he'll have to do the job himself.

The Indians find Chato's sons dead and attribute their demise to White Buffalo Woman's powers. Apparently they're not able to distinguish between bullet wounds and magic. They go to her camp and demand her help. Knowing she isn't a supernatural being, she again refuses.

Since she's turned down every Indian plea, it's not clear why they think she has healing powers. Because she's a white woman who lives in a sacred burial ground? Why not ask other Indians or white men for help? Other episodes have established that the Indians deal with white men occasionally.

The Indians depart but return to capture Adam when he's alone. They'll threaten to kill him unless she cooperates. Suddenly they're not too worried about her alleged ability to strike people dead. Maybe she'll miss them when she fires her invisible thunderbolts. 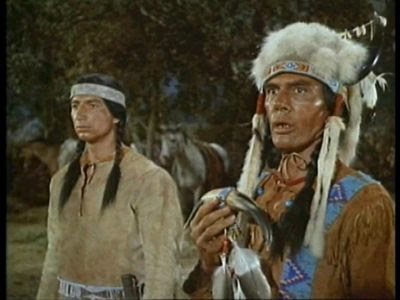 Chato the Plains-style Shoshone shaman, above.

Ruth appears and ignores Adam's warnings. When an Indian prepares to kill him, she agrees to go with and help them. Adam is left distraught and alone when the other Cartwrights find him. Ruth has survived but Adam probably won't see her again.

As usual, the Indians are played by non-Indians in wigs and headbands, but that's the least of The Savage's problems. First is equating the Shoshone tribe and religion with a Plains tribe and religion. Second is the Shoshones' inability to distinguish a white woman from an Indian spirit. Third is their reliance on an uncooperative stranger for their medicinal needs. Three strikes and The Savage is out.

For more Bonanza reviews, see The Paiute War in Bonanza and Day of Reckoning in Bonanza.
Posted by Rob at 5:04 PM