By Mike FlemingComment:  White man plots revenge against murderous Indians...yeah, that's really a story that needs to be told. Which must be why Hollywood told it a few dozen times already in the 1940s and 1950s. But there may be a few Americans who don't think Indians are savage killers, so let's tell it again.

McMurtry seems to write a lot about the Comanches. I hope these scripts won't be hatchet jobs like Comanche Moon was. But I suspect something is going on here. Does McMurtry like to make the Comanches look bad so his fellow white men (the Texas Rangers and other anti-Indian interlopers) look good? Is he prejudiced against Indians, as I've suggested before?

For more on McMurtry's writing, see Larry McMurty's Crazy Horse and Indians in Lonesome Dove. For another movie about the devilish Comanches, see Debating Unbound Captives. 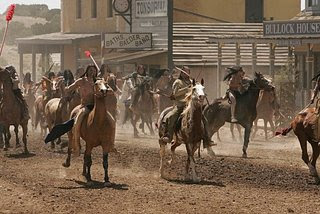