By Paul RuffinsComment:  The headline says the NMAI has "inaccuracies," but it would be more accurate to call them omissions.

The NMAI is a good museum, but it could be a great one. It isn't a great one yet.

When the museum's own staff admits it has a problem, then you know something's wrong. Almost every critic I've read has lambasted the museum for its lack of critical focus. People go to museums precisely to learn about the past. If they wanted feel-good stories about Indian country today, they could read a Native newspaper or magazine.

Now that the NMAI has tried its community-based approach, how about trying another approach? Continue using Native voices, but include the voices of activists, academics, artists, and others who are willing to look at the past. The museum's existence already proclaims the "we're still here" message, so the soft-focus exhibits are redundant.

For pictures of my visit to the NMAI, see Pix of My 2009 Washington DC Trip. For more on the subject, see NMAI Will Tell "Difficult" Stories, NMAI Not "Comfortable" with Negativity?, and Museums as Ethnic Advertising. 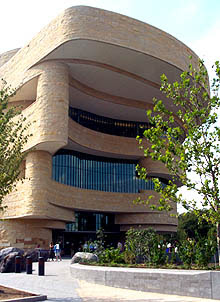 Instead of visiting the museum, people could just watch an episode of "The Lone Ranger" and let Tonto save them money and walk away with that traditional American "feel good" pat on the back!

I see a parallel between your Obama article above and this one. When Americans try to approach the indigenous people on any level, they do it from a "Wild West Buffalo Bill Cody" mentality. And it doesn't hurt to throw in a token native, as the guy with the headdress has proven, to remind everyone "Me, chief" and Obama chief too, now we, "chief to chief"?

Do the African American and Jewish museums paint the same cartoonish depictions as the NMAI or do they have wall sized photos, as natives do also, of mass graves and dead frozen bodies?