American Eagle in FEAR ITSELF

FEAR ITSELF was Marvel Comics' big crossover event this year. Here's all you need to know about it from Wikipedia:Issue #5 of THE HOME FRONT mini-series features American Eagle, the Navajo superhero, in a seven-page story titled "Red/White Blues." (Clever title.)

The plot is dense for a short story:

The Navajo Nation is vying with a nearby town to host a wind farm. Tensions between the two sides are running high when the sheriff's deputies find the sheriff dead and scalped. The deputies storm onto the rez and accuse the Navajos of murder.

Just then, three animalistic "spirits" appear to lead the Indians to "cleanse this sacred land of the white menace." Because of their mistakes and stereotypes, American Eagle deduces that the spirits are white men in disguise. The mayor hired them to get the Indians killed and win the wind-farm contract.

As one critic said, this story is "mildly entertaining but a little preachy." A couple of things are nice. American Eagle is the voice of reason, and his powers are mostly implied. Also, he unmasks the phonies by noting their ignorance of Indians, an obvious bit I'm not sure anyone has done before.

The use of mistakes and stereotypes isn't a problem because they're part of the plot. They prove that the dumb white guys are indeed dumb white guys. But the story has a lot of other problems that most readers won't notice. They turn what could've been a fine story into an average one. 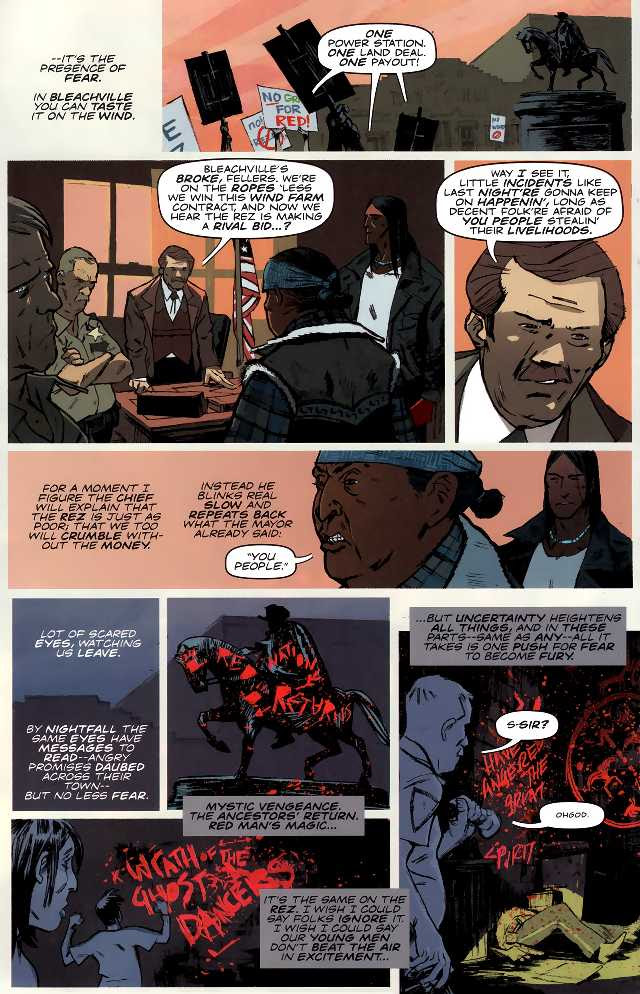 I'm pretty sure the sheriffs have no authority on the Navajo Nation. If a Navajo living on the rez committed a crime off the rez, I believe the FBI would get involved. In any case, the deputies have no reason to suspect any of the 300,000 Navajos. With zero evidence, they should be canvassing the neighborhood for witnesses, because the murderer could be anybody.

The deputy who storms onto the rez and punches the chief in the face is flatly ridiculous. After assaulting a head of state, the deputy almost certainly would lose his job and pension. He'd probably go to jail, if not a psych ward.

Moreover, his stated goal, to haul in "a list of known troublemakers," is a violation of the Fourth Amendment. He might get away with that in a small town with no legal oversight...but on a reservation? There's no way he could remove Navajos from their territory without arrest warrants, and probably not even then. Indeed, I suspect the Navajos would be well within their rights to arrest the deputy for assault and battery.

The deputy could've asked the Navajo tribal police for help...but they're nowhere in sight. The writer seems unaware that the Navajo have their own law enforcement system. This is a nation, buddy, not a few Indians huddled in blankets. 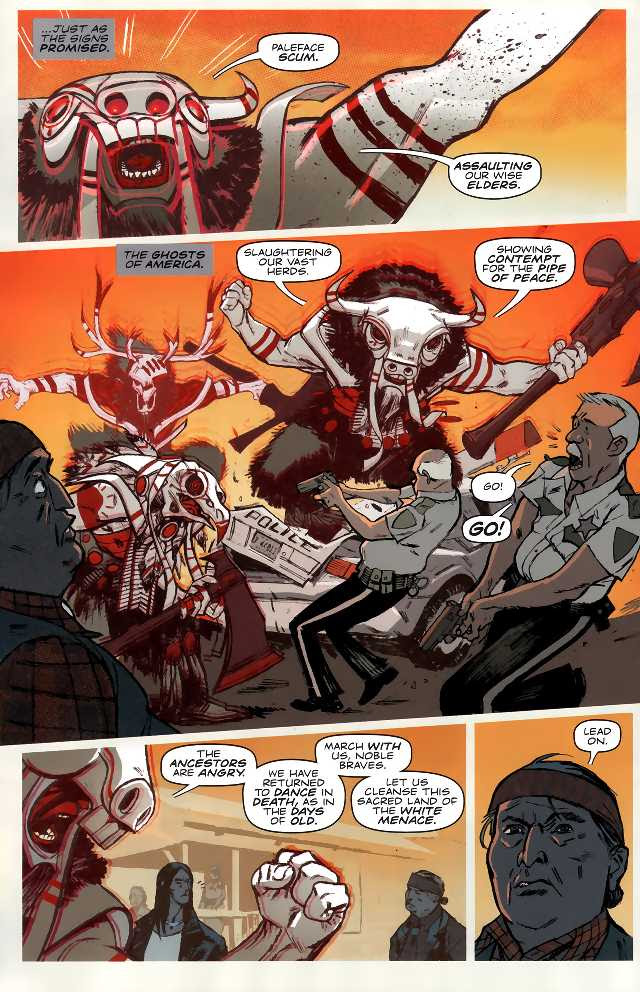 Huh? Does the Chief mean that white people would kill the "marauding" Indians? There's no way he could gather most or all of the Navajos to march against the white man. And there's no way that killing the actual number of marchers could "finish the reservation."

Or does the Chief mean the angry "spirits" and Indians would discredit the Navajo Nation and "finish" it that way? The answer is still no. Even if the marchers terrorized the region with WMDs, they'd have little or no effect on the other 300,000 Navajos. They wouldn't do a thing to threaten the Navajo Nation's sovereign status.

Besides, the spirits launched their attack in the border town, not on the rez. A wind-farm company would look at the situation and see mayhem in both locations. It would shift its operations elsewhere and both sides would lose.

So the mayor's plan is flatly ridiculous, again. And so is the writer's knowledge of Indians. We're talking about 300,000 people spread over three states, not 30 people in trailers. "Finish the reservation"? You'd have to launch a full-scale invasion of Dinetah to overthrow the Navajo government and "finish the reservation."

So...nice try, but no cigar. Memo to Marvel: Don't write about politics, business, or law enforcement on the rez unless you know something about it. Give me a call if you need some advice.

Indian comics (at least in the big producers) seem to be stuck in the Silver Age. It's rare that you see Indians being actual human beings.

Also, Indian superheroes tend to have Captain Ethnic clothing. More than any other. In a Five-Man Band, we tend to be The Lancer (the foil to the hero), The Big Guy (the strong one, loyal to a fault, often dumb, and mute), or the Sixth Ranger (guy who comes along later and is inevitably more popular than the other five; it helps that the Trope Namer's an Indian). Not to say we can't play the other roles: Mortal Kombat: The Animated Series made Nightwolf The Smart Guy. Captain Planet's Ma-Ti is The Chick. Even Power Rangers, which gave us the term Sixth Ranger, made Tommy The Hero after one season. But the other three roles are the stereotype for us.