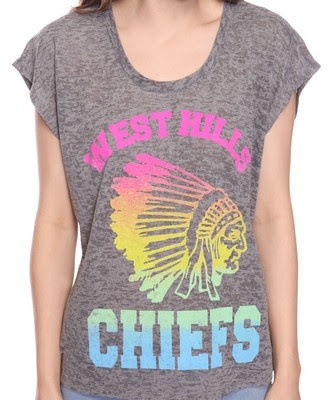 Comment:  Selling Native ripoffs on Columbus Day, a day of mourning, is an obvious faux pas. It's reminiscent of the "Party Like It's 1492" sale and outcry.

The clothing itself--at least the example shown--is stereotypical. But the real stereotyping comes from what was assumed rather than said. Namely, that nothing worth worrying about happened on Columbus Day. That it's a bland, inoffensive holiday for all Americans.

For most Americans that may be true, but not for Native Americans. For them, Columbus Day is like Slavery Day or Hitler's birthday. You wouldn't have a sale for those occasions, so you shouldn't have one for Columbus Day.

But Forever 21 didn't think or care about this. Their sale implies Indians are irrelevant, if not dead and gone. And that's a problem.

For more on the subject, see Open Letter to Urban Outfitters and Neo-Navajo Fashion Trend.
Posted by Rob at 9:20 AM