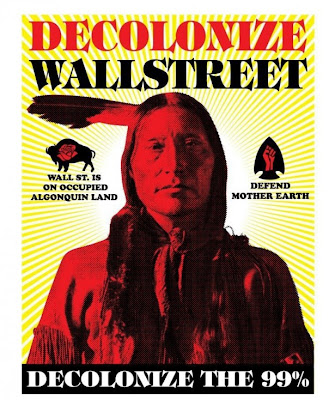 These are all valid points. On the other hand, the design (minus the stereotypes) is attractive and effective.

I'd say I have mixed feelings about this poster. Could be better, could be worse. 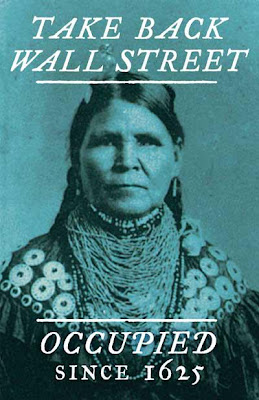 True, "decolonize" may not be a clear message to most people, although it is to me. But "Take Back Wall Street," as if that's enough to solve Native problems, is a limited message. It's asking for a small subset of what "decolonize" is asking for.

Also, I don't think "Occupied Since 1625" is clear and compelling. People may figure out that that's when Wall Street was founded, or they may scratch their heads. And what about the previous 133 years? For Natives, the message they want to get out is "Occupied since 1492," not 1625.

True, the Indian woman isn't stereotypical, but I don't find her calm face or the cool teal color effective. There might be a poster where her image would be the best choice, but this isn't it. 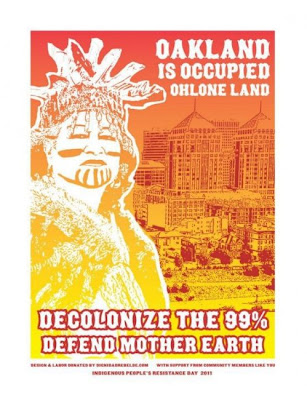 Right, and I'd go further. Like the first poster, the design and colors are vivid, memorable. The reverse-negative image makes the Ohlone Indian look more "present" than past, even if it comes from an old photo.

The "Decolonize the 99%" message is the same, but the "Oakland Is Occupied Ohlone Territory" line helps. It seems clear to me what this poster is advocating.

I'd say this poster is the best one. My second choice would be the first poster, even with the stereotypes. Adrienne obviously disagrees, and that's okay. <g>

An ideal Native poster for nationwide use might have the following elements:

There you go...your amateur art critique for the day. For more the Occupy movement, see Occupiers Aren't Decolonizers and Occupy Denver Joins Columbus Protest.
Posted by Rob at 10:59 PM

Good points all, but I would design this for Occupy Seattle: Photo of John T. Williams, with Angeline in the background, next to the occupation of Westlake park,
Wording, "The Voice of the People Should be the Law of the Land."

Too bad the OWS movement is all about promoting fascism, increasing the power of ruling elites, and blaming the wrong people for problems.

No, that's not what the Occupy movement is about, Anonymous #2. You may be thinking of the Tea Party movement. Try again and provide evidence for your claims this time.

Actually, the Tea Party is much more against the abuses of the ruling elites.