The First Americans:  Mounting Evidence Prompts Researchers to Reconsider the Peopling of the New World

By Heather PringleThe result of this evidence:Comment:  These findings have several cultural and political consequences. For starters, they eliminate the right-wing hoopla over Kennewick Man--the claims that white men may have been here first.

Indeed, the findings add almost 50% to the time Indians have lived here as unchallenged masters of the land and its resources. Their ownership of the Americas is that much more unassailable.

Moreover, Paleo-Indians weren't responsible for the megafauna extinction that occurred around the same time as the Clovis cultures. The Paleo-Indians had already been here for several thousand years when the animals began dying off. All the talk of waves of brutal killers exterminating species left and right--didn't happen.

Conservatives have used the megafauna extinction to attack Indians. They weren't proto-environmentalists who revered and protected nature, these critics have claimed. The mass exterminations prove they were thoughtless brutes who killed indiscriminately--savages, basically.

Poor, bigoted conservatives: All their semi-racist insinuations are out the window. Nobody exterminated anything until white Christian Euro-Americans began slaughtering species from the buffalo to the passenger pigeon. 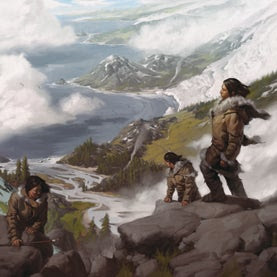 (Illustration by Tyler Jacobsen)
Posted by Rob at 4:39 PM

Indians are also blamed for killing off animals like the Aztlan rabbit. The Aztlan rabbit was last seen in 40000 years ago. According to orthodox anthropological theory, Indians have an alibi, having been somewhere in Africa at that time.

In the year five million, an Indian will stare across the Bering Strait to Alaska. This will lead to the extinction of the trilobite.

Anon forgot to mention Turok, which is based on actual tribal legends. It was him, not the meteor, that wiped out all of the dinosaurs.

I think you are a little ahead of where the arguments are heading on this as what I took as one of the subtext of the recent Manis Mastodon paper in Science (last week) is the reinvigoration of the association of big game and preclovis extinctions - just because it is no longer justifiable to speak of clovis first and clovis induced extinctions, does not mean they will not try to turn this intopre clovis big game hunters and pre clovis extinctions....