Obama's goal:  US as Indian reservation?!

Perhaps he meant the Mashantucket Pequot or Mohegan reservation, or another reservation of that type. You know, where a rising tide of prosperity has lifted every tribal member.

Less charitably, perhaps he meant a place where brown-skinned people predominate. You know, ghettos, 'hoods, barrios, reservations, and mosques. Where "those people" are trying to take over the country from "real Americans" like Burns.

The Tea Party audience cheered these remarks the same way they cheered executions and booed a gay soldier. Thus proving once again that teabaggers are racists. 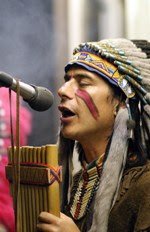