Halloween Costume Shopping:  A sampling of the racism for saleA typical example: 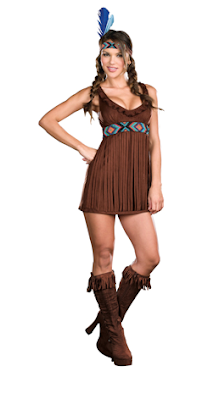 Keene's response:Comment:  For more on the subject, see Fake Indians in West Hollywood and "We're a Culture, Not a Costume."
Posted by Rob at 8:37 AM

That doesn't even look accurate. Of course, accurate would be less provocative. Must keep the fanservice.

By the way, "sexy" anything and Halloween don't belong together. Ever. Sexy cat/mouse/rabbit/fox makes us all think of furries, and it just goes downhill from there.