I finally saw the Code Name: Geronimo graphic novel in my local shop last week. I skimmed through it to see how it handled the huge "Geronimo" controversy from earlier this year. In the story, some soldier utters the word single word "Geronimo" minutes after the SEALs kill Osama bin Laden. it's not directly linked to bin Laden--or indeed, to anything. It's not clear in the story why the soldier says it. 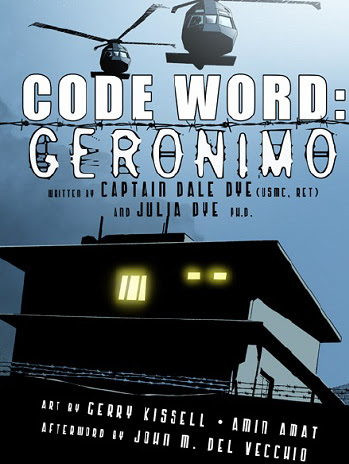 Nice way to skirt the controversy...except the book includes an afterword by John M. Del Vecchio. Here are a couple of quotes on this afterword:Yes. Del Vecchio takes the standard pro-military line that "Geronimo" was something other than a codename for bin Laden. He says it stood for Step G in the operation, one of several conflicting explanations offered by apologists.

This claim is as stupid as it was before. One, President Obama himself said bin Laden was "Geronimo." So did a couple other sources.

Three, "Geronimo" could've been the codename for the killing process and the target of that process. So Del Vecchio's explanation is almost worthless. Until someone produces a document saying "Geronimo" was the step but not the target, it isn't worth discussing.

Del Vecchio's rationalization for this offense is also the standard pap. He says the "Geronimo" codename honored the bravery and determination of America's fighting forces. Yeah, and it's just an incredible coincidence that a "step" to kill a terrorist was named after an Indian many considered a terrorist.

I'm sure the other "honorable" name considered for Step G was "George" for George Washington. Because he was an incredibly brave and determined warrior who fought against impossible odds too. And no one would object to linking George Washington's name with the world's greatest terrorist, right? Even though Washington terrorized and destroyed many Seneca villages--kind of like bin Laden.

Below:  Honoring our military by linking the kill step, but not the target, with a evil terrorist great American. I'm sure nobody could misunderstand this as a swipe against George Washington, Town Destroyer Father of Our Country.

Del Vecchio doesn't give any sources for his information, and it's contradicted by the evidence. I wouldn't be surprised if he had no firsthand information and is just repeating what he read somewhere. In short, until you can prove your case, spare us the spin, buddy.

What the publisher meant

That the publisher devoted an afterword to this controversy, while avoiding it in the story, shows what's really going on. We could sum up the afterword thusly:

"We realize that the Code Name: Geronimo is grossly insensitive, but it's a great marketing tool. As a sop to Native Americans, we'll throw in this afterword. We won't apologize for our insensitivity, but at least we'll acknowledge it. Readers will understand how we're trying to kiss up to the military while not totally giving Natives the finger."

For more on the subject, see Indians, Terrorists = US Enemies and How People Get Labeled "Terrorists."
Posted by Rob at 6:36 PM

I can't even understand why it is that Indians are always the enemy. In Vietnam, they would have the South Vietnamese watch Westerns, to associate the Indians with the VC. Seriously.