Slow Food has much in common with Wampanoag traditionsFor the sake of comparison: 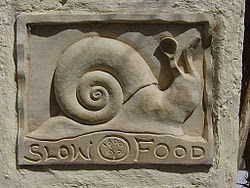