Small correction to the correction: Columbus wanted to reach China, not the West Indies.

Even getting three mentions for Indian-related topics is unusual. That they mocked the ignorance of non-Indians, rather than mocking Indians, was nice.


The announcer said, "These bands will give Queen Isabella polyps!"

DJ SuperSoak said, "The Columbus Day AssBlast is also about giving back. Here to tell you more is MC George Costanza."

In a tricorn cap and wire-rimmed glasses, MC George Costanza (Jay Pharaoh) looked like a cross between Columbus and Ben Franklin. He also had one tooth blacked out. He said, "Yo, we got a new charity for y'all. It's called 'Dirt for Native Americans.'

"When we came to America, Columbus stole all the Native Americans' land. Now we're giving them a bunch of it back. So bring us your loose dirt, divots, and full-out mud clumps, and we'll give you a front wedgie."

None of this is especially good humor about Indians. But it had an overriding feel to it. It was criticizing and mocking Columbus Day--a holiday Americans used to take seriously. Now it's an opportunity to hint that Indians still exist and they're not happy with Columbus.

In the past, SNL hasn't done well by Indians. I wonder if someone pointed that out--perhaps a Newspaper Rock reader? Or if they got some new writers. In any case, the new approach is better. 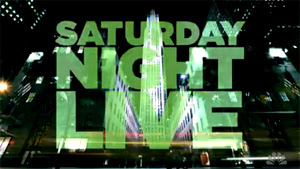 But the joke is hilarious.