The new (and improved?) textbook Columbus

By Bill BigelowSumming up the books:Comment:  Bigelow doesn't say as much about History Alive! as he could. Not only can students choose between the three interpretations, but they're grossly imbalanced. The first interpretation is about his moral character, and that goes unchallenged. The second and third are about his mariner skills, a relatively minor issue. One says they were "supreme" and the other says they were "overrated," a mild critique.

What's missing is a fourth interpretation to balance the first one. For instance:

4. Columbus was a criminal, slave trader, and murderer whom many Natives compare to Hitler or Osama bin Laden. He was a genocidal maniac.

Anyway, Rethinking Columbus is an excellent book that everyone interested in Columbus should read. When I read it, I wanted to share several of its essays with my readers.

For more on textbooks, see Tennessee Teabaggers Want to Rewrite Textbooks, Indians Evolve in Textbooks, and Indians in Christian Textbooks. 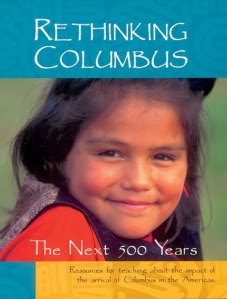