By Shandra MartinezAnd:And:Comment:  Native News Network is also different from Pechanga.net, where I work.

I've already linked to dozens of Rickert's stories both here and on Pechanga.net. My hat's off to anyone who can write one or two stories a day, much less five. He's doing great work covering stories that no one else has covered.

For more on Native journalism, see Colonial Imagery in Canadian Newspapers and Native Can't Be Professors?! 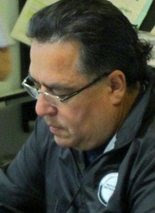