Indians sexualized since the beginning

Blogger Stephen Bridenstine discusses the book Pocahontas and the Powhatan Dilemma by Camilla Townsend. He and Townsend note how Euro-Americans have sexualized Indian women since the beginning.

Portraying Pocahontas: or the Not-So-Modern Origins of the "Sexy Indian Princess"This early image shows exactly what white men thought of Indian women. They were wild and wanton, like beasts swinging from trees. In other words, sexual animals in human form. 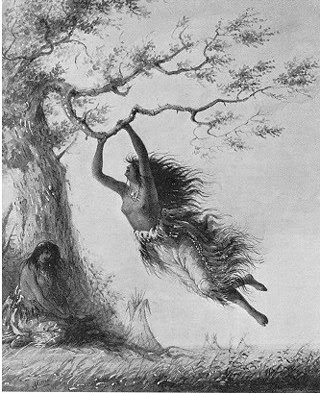 If this stereotypical belief ever abated, it's on the rise once again. With mass-produced outfits and mass-communicated ignorance, hordes of non-Indians are trying to release their "inner Pocahontas." They want to be wild and wanton, or at least convey that impression in a safe way. Why be a plain-vanilla white girl when she can be an exotic Indian princess--a sexual savage who may rip off her buckskins and ravage you at any moment? What red-blooded man wouldn't want a primal playmate like that?

Bury my heart on Halloween

The consequences of this sexualization of Native women are sadly obvious:

By blackwingeddoveComment:  For more on the princess stereotype, see Navajo Dallas Cowboys Cheerleader and Sexy "Indian" in New Girl. 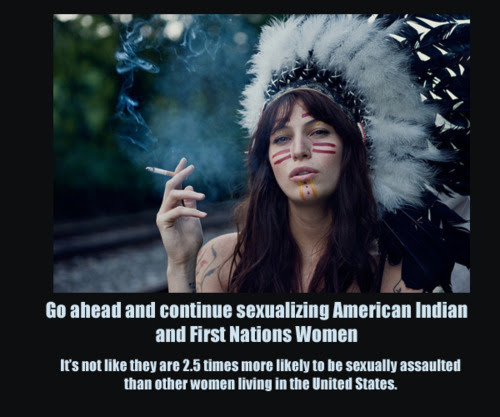 And of course there's "Chuluaqui Quodoushka" these days. It was on HBO in 1992. This "Cherokee" sex workshop endorses shota and loli (firewomen? firemen?), in addition to incest and a general sense of hedonism.

They also claim the Cherokee word for penis is tipili (it isn't) because it looks like a tipi (which is not typical of Southeastern cultures at all, and I'd like to see what anatomy textbook they're getting this from).

White people who fetishize Indians fail. At everything.