'It's not dressing up for us, this is who we are':  Native American-obsessed British couple have tribal marriage (and spend their wedding night in a tepee)

By Lauren PaxmanI'm pretty sure no Indian ever wore traditional clothing in that shade of sky blue.It's dressing up because you're "disgusting Indian wannabes," as one commenter put it.As another commenter put it:From the costumes and the "tepee" reference, I guess they're aping the Lakota or another Plains culture. Which is what everyone apes when they're pretending to be Indians, of course.

Naturally, they don't name a particular culture, if they even know one. To them, it's all part of a generic "Native American culture."

At least they're not wearing headdresses or lots of feathers. But with all the beadwork and jewelry, their costumes look more like, well, costumes than anything traditional.

And of course they've given themselves phony Indian names, although Sharman managed to avoid calling himself Grey Eagle or Owl. Yay.

As the commenter noted, Sharman's final comment is the key one. "They were so clever" and so forth. No acknowledgment whatsoever that Indians still exist, living in modern society, sans the stereotypes he's perpetuating.

That's how he views Indians: as relics of the past. And that's the message he's sending to his community and the world: "Indians are gone so we can appropriate their identities."

It's as stupid as if I dressed up as a knight in armor and said I represented British culture. Indeed, most Indians are as far removed from tipis as Sharman is from castles.

For more on Indian wannabes, see Tribalism Is Trendy and British Couple Lives Like Indians. 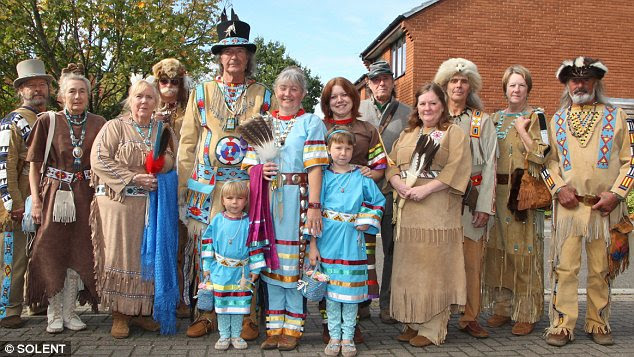 Email ThisBlogThis!Share to TwitterShare to FacebookShare to Pinterest
Labels: Stereotype of the Month, stereotypes, wannabes