Preview of Man in the Maze

Shoals-made ‘Maze' has world premiereComment:  A one-of-a-kind story that sounds like every other "Indian burial ground" story...hmm.

I understand the impulse to tell burial grounds story. Native religions talk of everything having spirits. And storytellers want to connect America's mundane present with its rich Native past.

But Native legends don't talk much about ghosts, curses, and haunted places. And storytellers rarely acknowledge the continued presence of Indians today.

The first PEACE PARTY story I wrote had a spirit trapped in a burial mound. Yes, it's kind of a cliché, but there are differences. In particular, the mound wasn't cursed and the spirit was more misguided than malevolent. There was no claim of evil or horror attached to the Native culture.

Also, it was only one story in the series. First a ghost story, then a crime drama, then something else. It's not as if I said, "I want to do a movie about Indians. I plan to devote three years and a million dollars to give audiences my take on them. And my subject will be...a cursed burial ground!"

So do your supernatural stories, storytellers. But be creative, as I tried to be. Mix it up and don't tell the same story as everyone else.

For more on the subject, see Wendigo Movies at imagineNATIVE 2010, Indian Massacre in Night at the Temple, and Terry Gilliam's Legend of Talladega.

Below:  A spirit has a bad dream in PEACE PARTY. 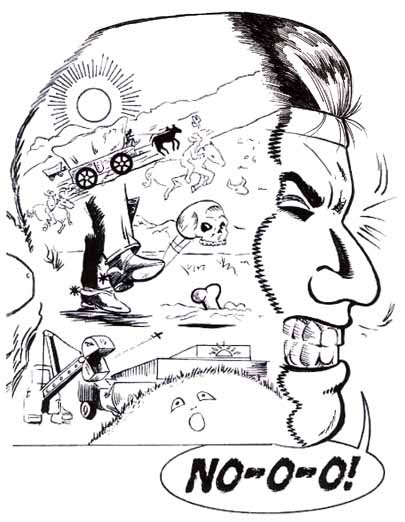