An excerpt from a newsletter by Chuck Rozanski of Mile High Comics (August 26, 2009):Comment:  I love the blend of traditional and modern elements in Native art. If I were rich I could see collecting Native art the way Rozanski does.

For more of Rozanski's musings on Indian subjects, see NMAI = Piece of Junk and The Pottery-Comics Connection. 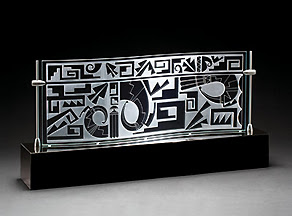