Whether you search through print or online, it's hard to discover what the Indians thought when they started dying of European diseases. So I was pleased to hear something about this in the Fort Raleigh episode of Time Team America.

This may be the best statement I've heard on the subject. It comes from Karen Kupperman, a history professor at New York University who specializes in "early modern Atlantic world; colonization; Native American history." Her explanation applies to the Algonquian cultures, so it would've been valid up and down the Eastern seaboard.

On the show, Kupperman describes the Algonquian worldview. These Indians thought people went to live in the underworld when they died, lived a complete life there, then died and came back into this world. Based on this, they developed a theory of disease.

According to Kupperman, the Indians knew the English were the source of disease. They explained the transmission of this disease thusly:Wow. I find that fascinating. I had a hunch the Indians believed something, but I never would've guessed it was this particular belief.

But to the Indians, it made perfect sense. To them, it was "true." The English spirits were merely another group of spirits among the ones they already knew.

The Algonquian belief wasn't any stranger than the European belief about "humours," which also involved "magical thinking." Both sides had unscientific theories about how diseases worked.

Now let's put this Algonquian belief about disease transmission to work. The Algonquian Indians knew the English were responsible for transmitting diseases. That required only simple observations: When the English arrived, Indians started dying.

The Indians believed the English had been reborn from some strange place underground. They saw the English killing things with guns that fired seemingly magical bullets. To them, it made sense that invisible spirits lurked among the English, firing invisible guns with "disease bullets."

What were the consequences of this belief? Initially the Indians were friendly to the strangers visiting their shores. But eventually the English wore out their welcome. They used up the land's resources, which made life difficult for the Indians. When the Indians resisted, they killed or enslaved them with tangible or intangible (disease) bullets.

The Indians probably tried everything they could think of. First came exchanges, gifts, assistance--i.e., charitable handouts to the incompetent settlers. When that didn't work, they tried negotiations, threats, hostilities.

And when that didn't work, they had few options left. Clearly the English weren't going to leave voluntarily. Moreover, the invisible spirits among the English were killing them with invisible bullets. A state of warfare existed and the Indians had to defend themselves or die.

Given the Indians' worldview, it doesn't surprise me that they occasionally massacred a settlement of "innocent" white men, women, and children. To the Indians, these people weren't innocent. They had brought deadly diseases to the Indians' land. They were harboring evil spirits who were killing the Indians from afar. The Indians were faced with annihilation unless they annihilated the enemy force first.

Since the Indians didn't know exactly how the disease-shooting spirits operated, their actions seem rational to me. The English had refused to stop the killing or leave. Diplomacy and limited hostilities had failed. All-out warfare was the final option. (I suppose the Indians could've surrendered and accepted death instead, but I don't consider that a realistic option.)

As a last resort, therefore, the Indians sometimes killed everyone in a settlement and burned it to the ground. That's the only way they could be sure of stopping the visible and invisible English killers. Killing everyone, even the "innocent" women and children, was justifiable self-defense.

Let's recall that, although neither side realized it, the bodies of "innocent" English women and children did harbor diseases. Figuratively speaking, the Indian view of disease was correct. Every English person, whether innocent or not, had the potential to fire an "invisible bullet" of disease at the Indians. Eradicating the catastrophic death threat was a sane response to an insane situation.

I'm glad to see that the more I learn, the more my position seems valid. Incidents such as the Jamestown massacre were justified as self-defense. Any jury of the Indians' peers would've found the Indians not guilty of murder.

That the Indians' beliefs weren't "scientifically" valid doesn't matter. All that matters is that they sincerely believed what they believed. They didn't kill the colonists because they were mad, evil, death-dealing savages. They killed the colonists to stop the colonists from killing them.

For more on the subject, see Justified Killings at Richland Creek.

Below:  Indians fight back after the English fire upon them with "invisible bullets." 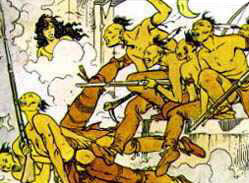 Indeed, the bloody hence brutal massacres of white settlers was justified. If one were to understand the indians worldview. It simply came down to a matter of life or death, kill or be killed. Certainly, the indians didn't want to die so they had to fight back. Anybody in their right mind, regardless of their race/ethnic make-up will understand this.

But sadly, the average dimwitted white folk today, do not possess this rational understanding. And they will always regard the indians as cold-blooded ruthless savages.

"Given the Indians' worldview, it doesn't surprise me that they occasionally massacred a settlement of "innocent" white men, women, and children. To the Indians, these people weren't innocent. They had brought deadly diseases to the Indians' land. They were harboring evil spirits who were killing the Indians from afar. The Indians were faced with annihilation unless they annihilated the enemy force first."

The killing of civilians is never justified; do you see the hypocrisy in whining about dresden and hiroshima and then going onto to try to justify Indian atrocities? Because your arguments remind of attempts to justify hiroshima and dresden.

"I'm glad to see that the more I learn, the more my position seems valid. Incidents such as the Jamestown massacre were justified as self-defense. Any jury of the Indians' peers would've found the Indians not guilty of murder."

Another quote of Rob's:

"But sadly, the average dimwitted white folk today, do not possess this rational understanding. And they will always regard the indians as cold-blooded ruthless savages."

Although it seems this "Stephen" poster doesn't quite get the point of this article. He woefully goes about juxtapositioning other ethnic civilizations to those of American Indians on the East Coast some 500 years earlier. What he doesn't understand about the analogy he noted is egregiously irrelevent. The life of American Indians 500 years ago are not reminiscent of those he asininely compared us with. I don't see the relevancy of "Hiroshima" or "Islamic Fascist" facing total annahiliation as our early ancestors did. Is America waging a total obliteration of Islamist worldwide? If so, why is Islam so prevalent in Europe and Southeast Asia hence globally? As for Hiroshima, the Japanese invaded mainland China and the Philipines and not to metioned the attack at Pearle Harbor. Hiroshima was a pivotal point in ending the war with Japan so in hindsight it was justified after the Pearle Harbor attack. I find "Stephen's" lack of Americanism objectionable.

Seriously, I don't think you fully understand the true meaning of the term "racist", since your Liberal delusionists constantly over use the term. Like smokes and mirrors if you will.