To be named a saint, the founder of California's missions has to be credited with a final marvel. One possibility: an artist who is still alive after losing a third of her skull in 14 brain surgeries.

By Steve ChawkinsComment:  Our Founding Fathers weren't saints, Father Vaughn. They were grossly imperfect humans who did bad as well as good things. If that's your best argument for canonizing Serra--that he, Washington, and Jefferson all enslaved people--you lose the debate.

By the way, many of the Founders knew slavery was wrong, but they were too selfish and greedy to end it. So your analogy fails for that reason too. Try again.

If you study your own religion's history, you'll learn some Christians deplored the Spanish treatment of Indians almost from the beginning. In fact, the Church held debates on the morality of its actions in the 1500s. So spare us the ridiculous claim that people were unaware of what Jesus taught until the 20th century.

The article also notes that the Church has exhumed Serra's body twice and shaved bits of his bones so people could have a piece of him. Those Christians are as superstitious as children with their lucky rabbit's feet. But they think it's weird that Indians hang dreamcatchers or carry medicine bags?!

The Church has devoted 10,000 pages and countless man-hours to proving Serra is a saint. Do Catholics think they'll defeat Jews and Muslims in heaven if they have more saints on their team? They already have thousands of them, so why would they expend so much effort to find one more?

Showing how screwy the canonization process is, Wikipedia reports that Christopher Columbus was "a candidate for sainthood in the Catholic Church in 1866." Yeah, because it was a miracle he blundered into the Americas on his way to Asia. And a miracle some indigenous wise man who saw the future didn't give him the same welcome as Magellan and Captain Cook.

For more on the subject, see Mural Depicts Subservient Indians and The Missions' Mission. 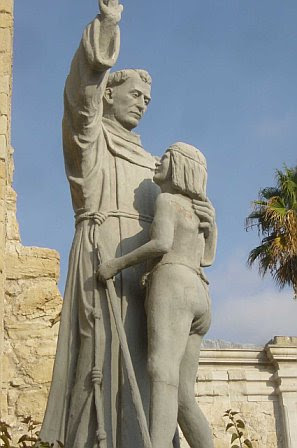