'Native American' protesters to US: Give us back Manhattan

Some 20 people protest in front of American Embassy against US pressure on Israel to freeze settlement building. Protesters dress up as Native Americans in effort to remind US that pioneers who settled their country did not quite ask where they could and could not build 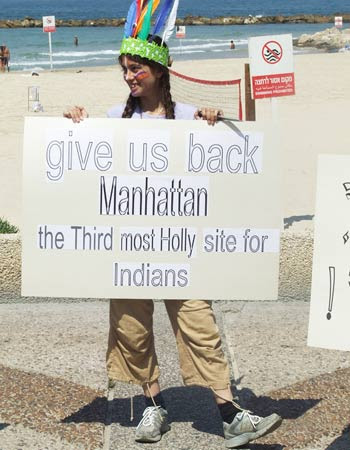 Comment:  Wow, what a spectacularly bad idea for a protest.

In Zionists = Puritans, Dan Lieberman argued that Israeli Zionists were more like the early Puritans than the later Americans who believed in Manifest Destiny. Now we see that they're some of both. (Puritans were practicing their own form of Manifest Destiny before the term existed, but that's a detail here.)

Incredibly, here's the Zionists' core message: We're like the Euro-Americans who took Manhattan from the Indians. We take pride in our theft of native land; we'd do it again if we could. America's colonizers were among the first to instigate genocidal policies against the indigenous population. Since we've equated ourselves with them, draw your own conclusions about whether Zionism is (potentially) genocidal.

Even Yeagley gets it, sort of

Even David Yeagley, who is stupidly wrong about most things, pegged the stereotypical nature of this protest:

“Fighting Sioux” in Tel Aviv!And:Yes, Indians have long stood as symbols of protest against authority. As many people have observed and I reiterated in The Political Uses of Stereotyping.

Yeagley even noted how silly it is for Israelis to dress up as Indians when Palestinians did it two years ago:

Too bad Yeagley didn't say more about the obvious contradiction here. Israelis and Palestinians can't both be "Indians" conceptually or thematically. Now these conservative Israelis have correctly identified themselves with the Euro-Americans who appropriated Native land and turned the inhabitants into refugees. Which means the Palestinians are the Indians in this scenario.

Unfortunately, Yeagley's prescription for this stereotyping is, well, stupidly wrong. As usual. He decries the use of Indians as "negative" mascots...so he'd use them only as positive mascots. Dressing people as primitive savages with bows and arrows isn't a problem to him if they're "honoring" Indians. It's only a problem if they dare to criticize his beloved Great White Father in Washington DC.

The actual solution is not to portray Indians stereotypically in any context. It's to portray them as they really are, free of myths and stereotypes. Too bad Yeagley, with his fetishism of savage Indians, doesn't understand this.

Gotta say I love this posting. Finally some Zionists have demonstrated what many of us already knew. I wish I could give it the many headlines it deserves:

Let's Cheat the Indians and Palestinians Together

For more on the subject, see American and Zionist Imperialism and Indian Country = Zion.

P.S. No comments this time because I don't want fanatical reader Stephen posting a long diatribe "proving" that Israel's illegally occupied territories aren't illegally occupied. I already kicked his butt on that subject once and I don't want to do it again. E-mail me if you have any reactions to this item and I'll consider posting them. 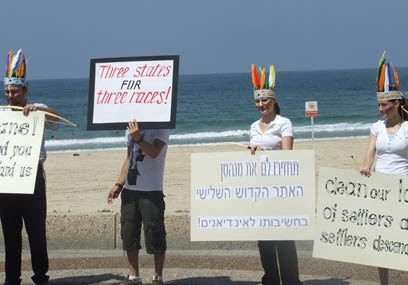