How the Native American extermination campaigns merged the dangerous forces of a standing army with the business/political interests of the Republican Party.

How the situation started:The first half of the 19th century gave us the War of 1812, the Black Hawk War, the Trail of Tears, and the Seminole Wars, so I'm not sure trade and cooperation were "much more common." 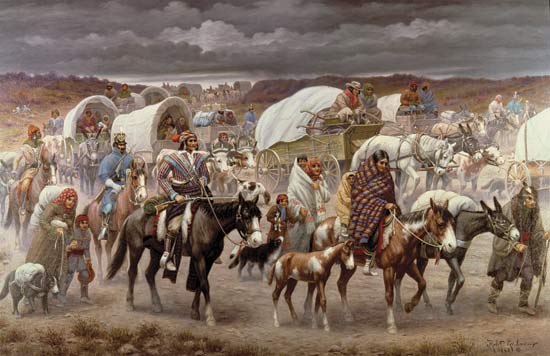 How to eliminate the Indians

The final solution to the "Indian problem":Not coincidentally, the second half of the 19th century is when the first inklings of mass media started appearing. Americans started seeing touring shows of paintings...dime novels...Wild West shows...and the first photographs. These featured cowboys and Indians prominently.

Our national mythology of cowboys and Indians came about precisely because we were prosecuting a war against the Indians. Thus we cast ourselves as the brave, noble cowboy-soldiers in the mold of George Armstrong Custer and Theodore Roosevelt. This model would become enshrined in the national consciousness by Western movies starring John Wayne and other cowboy heroes.

Meanwhile, we had to demonize the Indians so we had a "valid" reason to kill them. So we folded them all into a single set of Plains chief and warrior stereotypes. Because acknowledging that many tribes had signed treaties and were at peace with the US didn't fit the national narrative. And we started to demonize Indians with terms like "dirty," "thieving," "ragged," "degenerate," "vile," "bloodthirsty," and "murderous." Words that may have been neutral, like "redskin" or "squaw," started to become epithets.

The public had been divided on the Indian issue. The Indian Removal Act had passed by only one vote, and people were appalled at some of the Army massacres. The Nazi-style propaganda campaign swung public opinion against the Indians--just as it did the Jews half a century later. It made extermination seem like a sad but necessary choice.

Even artists (authors, poets, painters) who were usually sympathetic to the underdog chimed in with paeans to the vanishing Indian. The liberal/romantic/sentimental view was that Indians were doomed to disappear as a result of inevitable "natural" forces. The conservative/pragmatic/business position was that we had to get rid of the Indians by hook or crook.

Almost no one took the position that, hey, the Indians were here first, had a valid way of life, and signed treaties to guarantee their rights. Maybe we could practice what we preach and treat them with Christian kindness rather than destroy them as devils. You know, give them part of the country and coexist with them rather than kill them and take everything they own.

How the extermination was carried out:

Genocide is as genocide does

This puts the lie to everyone who has claimed genocide wasn't an "official" American policy. Sure, Congress didn't pass a Kill the Indians Act, but who cares? The people in charge--Grant, Sherman, Sheridan, et al.--established US policy by their words and deeds.

They didn't need to pass a law to launch the Indian Wars. They did it by executive decisions and military orders. And their intent was plain: to figuratively or literally exterminate the Indians. To clear the land for railroads, ranchers, miners, settlers, and other "good Christian" capitalists.