Khloe Kardashian in a headdress

Adrienne Keene notes this item in her Native Appropriations blog: 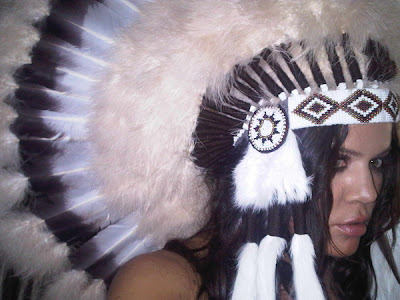 Comment:  I'm not necessarily posting every pic of a celebrity in a headdress. But her comment expresses the problem perfectly. Kardashian doesn't care the slightest about real Indians. She isn't honoring or acknowledging them. She doesn't belong to some vague "world tribe" she just made up. Nothing like the half-assed defenses some hipster wannabes have offered.

No, she just likes "playing dress up." To her, an Indian is nothing more than someone with a funny hat. Anyone can become an Indian just by putting on a Halloween costume. In Kardashian's mind, Indians have no distinct history, culture, or religion. They're just people who do colorful and strange things: dancing, whooping, painting their faces, and dressing up in costumes.

Like other hipsters in headdresses, she's perpetuating the stereotype of Indians as primitive people of the past. If you told her Indians were dead and gone, I bet she'd agree. If you told her her agent, make-up artist, or bodyguard might be an Indian, she'd probably look at you like a slack-jawed idiot. If she doesn't see any buckskin-clad savages around her, they don't exist.

For more celebrities in headdresses, see Cher in a Headdress and Kiowa Gordon in a Headdress. For what it means, see Indian Wannabes = Celebrity Wannabes. For why it's wrong, see The "Honor" of a Plains Chief and Stereotypes Okay in "Cultural Commons"?
Posted by Rob at 9:57 AM

I'm Native American. It's not offensive to me.

Can someone please hand her a smallpox infested blanket? Just think she can infect the whole family of attention whores.